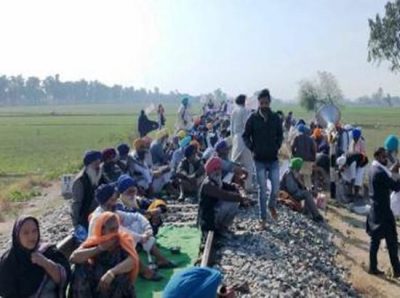 Ferozepur, December 3, 2019: Rail traffic on four rail tracks in Ferozepur division was disrupted on Tuesday by farmers under the banner of Kissan Mazdoor Sangharsh Committee, Punjab, in support of their demands.

The protesters started the agitation by blocking the railway line at Bute Wala station.

Addressing the farmers, Inderjit Singh Kahliwala, district president, Sahib Singh Dine Ke, secretary, and Rana Ranbir Singh, general secretary, said they had a meeting with the Chief Minister on September 16, 2019. The CM gave them an assurance that 14 of their demands would be implemented but none have been implemented so far.

Apart from this, Rs 77 crore balance payments are due to the farmers for sugarcane crop, they said.

The other major demands include payment of Rs 6,000 per acre as compensation to those farmers who have not burned the crop residue and withdrawal of all police cases.

They also condemned disrespect shown to their turbans and women, who also joined the agitation, by the police.

They threatened to continue their agitation till their demands are not accepted and implemented.

Railway sources said about 1000 farmers sat on dharna on rail tracks blocking movement of 10-15 mail express and dozen passenger trains. Due to this about 25,000 passengers have been affected.

Differently abled student made DC for a Day on eve of World Disability day
Journalists to get services of Sarbat Sehat Bima Yojana from Nov 29: Balbir Sidhu
Comment