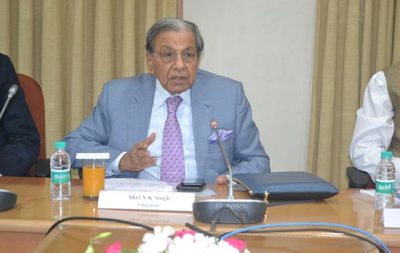 The First Meeting of the15th  Finance Commission’s Committee on Fiscal Consolidation Roadmap is scheduled on 21st May 2020 through video conferencing.

One of Terms of Reference (ToRs) of the Fifteenth Finance Commission (XVFC) is to make recommendations on the fiscal consolidation roadmap of the Central and State Governments, taking into account their responsibility to adhere to appropriate levels of debt and deficit levels, while fostering higher inclusive growth, guided by the principles of equity, efficiency and transparency. In pursuance of this ToR, the XVFC constituted a Committee to Review the Fiscal Consolidation Roadmap of the General Government on 18th   March 2020 under the chairmanship of N K Singh, Chairman, XVFC.

Action has already been taken by the Union Government on the Report of the XVFC for the year 2020-21. The mandate of the XVFC, under the aforesaid ToR, is to work out the fiscal consolidation roadmap for the General Government for the period, 2021-22 to 2025-26. This task has been complicated by the extra-ordinary situation caused by the spread of the pandemic and the concomitant fiscal compulsions on the Central and State Governments. Responding to the situation, the Union Government has given additional borrowing space of 2 percentage points of GDP to the State Governments, apart from the 3 percent that was already available.

In order to take stock of the emerging fiscal scenarios and to chart the way forward, an online meeting of the aforesaid Committee has been scheduled for tomorrow. The meeting is likely to be attended by N K Singh (Chairman), Ajay Narayan Jha and Dr. Anoop Singh, Members of the XVFC,  Dr. Krishnamurthy Subramanian, Chief Economic Adviser,  Soma Roy Burman, Controller General of Accounts,  Rajat Kumar Mishra, Joint Secretary in the Ministry of Finance, S Krishnan, Additional Chief Secretary of the Government of Tamil Nadu, Anirudh Tiwari, Principal Secretary of the Government of Punjab and Dr. Sajjid Z Chinoy and Dr. Prachi Mishra, eminent analysts.