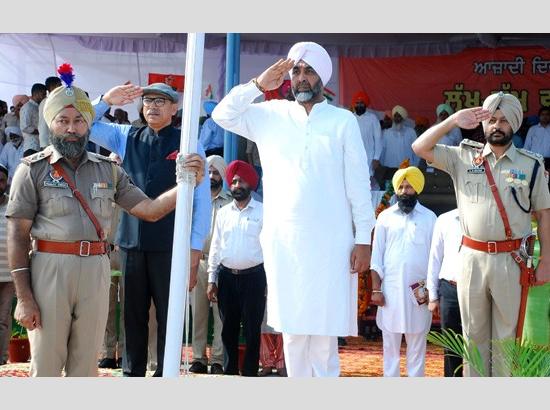 MOGA, August 15, 2019: Reiterating the firm commitment of the Captain Amarinder Singh government to make Punjab free from illiteracy, unemployment and drugs, Finance Minister Manpreet Singh Badal on Thursday, gave a clarion call to the public to come forward for achieving this mission.

The Minister, who hoisted a National Flag during a district-level function to commemorate 73rd Independence Day at New Grain Market here on Thursday, said that the path-breaking initiatives taken by the Chief Minister Captain Amarinder Singh led state government has started showing encouraging results. The Minister was accompanied by Deputy Commissioner (DC) Moga Sandeep Hans and Senior Superintendent of Police (SSP) AS Bajwa.

“I am aspiring for a Punjab which was dreamt by Shaheed-E-Azam Bhagat Singh and Martyrs, who laid their life for the freedom of the country,” he said.

Addressing the gathering, the Finance Minister said that this would be for the first time that the Government School students outshine the students of Private Schools in results while the Punjab government has also revived the Induction Furnace Units Mandi Gobindgarh.

He also said that the Punjab government is going to organize a grand function at Sultanpur Lodhi to mark the celebrations of the 550th Parkash Purab of the First Guru Shri Guru Nanak Dev Ji falling in November this year. He said that the Punjab government has started a campaign to plant 550 plants in each village of Punjab to mark the Parkash Purab.

On the occasion, the Finance Minister also honored families of freedom fighters and 17 employees, NGOs and persons from various walks of life for their remarkable contribution towards society. He also distributed sewing machines and wheelchairs among needy people.

Meanwhile, Finance Minister took a salute during an impressive march past and applauded the various cultural performances presented by hundreds of students from different schools of the district. During the event, Finance Minister Manpreet Singh Badal also handed over 14 job-offer letters under Ghar Ghar Rojgar Yojna.