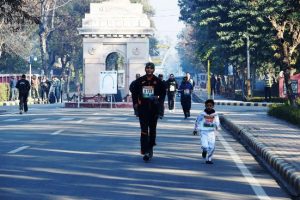 Ferozepur, January 27, 2020: The Golden Arrow Division conducted a ‘Mini Marathon’ to commemorate the 71st Republic Day on 26 Jan 2020 at the Golden Arrow Environmental Park and Training Area in Ferozepur Cantt.  The event was flagged off by Major General Amit Loomba, General Officer Commanding, Golden Arrow Division.  The event was organised under three categories – for men and women above 18 years of age for 5 Km run, children between 15 to    18 years of age for 5 Km and children between 10 to 15 years of age for 3 Km.  The event saw a keen participation from service personnel, civilians, ladies and children and thereby encouraged a healthy and cordial interaction between the participants.

The event was also aimed at giving a fillip to the ‘Healthy India Campaign’ in the Military Station towards health awareness and healthy living.  The event culminated with Mrs Divya Loomba, Chairperson, Golden Arrow Family Welfare Organization, felicitating the winners in each category.