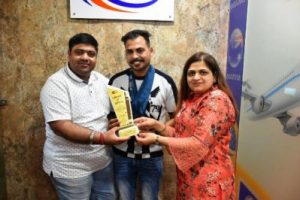 With winning six gold medals, Harpreet has figured at the international level and is honour for India.  Harpreet is a teacher by profession in a government school and also NIS Swimming Coach.  He gives coaching to the swimmers in the Swimming Pool in Zila Parishad complex.

Harpeet has participated in this competition at his own expenses.  He has won all these medals in 30-35 years players of 50 m, 100 m breast and 1—and 200 m back breast.  However, he was the only from border town Ferozepur to represent India in this competition.

He said, as many as 1200 players from Australia, Sweden and England participated in this competition.

Congratulating and honouring Harpreet Bhullar, Rahul Kakkar, MD and Monika Kakkar, CEO WAIC said, We feel pleasure to honour swimmer Harpreet Bhullar for representing India in the competition and bagging six gold medals.  They said, the players like Harpreet are an example for others.