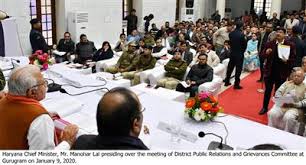 Gurugram, 9 January 9, 2020:  Haryana Chief Minister,  Manohar Lal has directed that the grievances of the people should be redressed on a priority basis. He said that no negligence of any kind will be tolerated while dealing with the complaints filed by the State people.

While interacting with the media, the Chief Minister said that the 5th meeting of the Gurugram Metropolitan Development Authority (GMDA) was held yesterday in which several decisions for the development of Gurugram was taken. He said that after the completion of these GMDA projects, people will get to see Gurugram as an international city.

He made it clear that if any matter is reported to the State Government, then after checking the facts of the complaints in a transparent manner, necessary action will be taken.