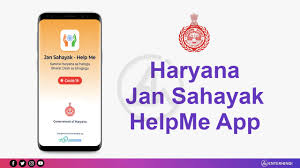 Chandigarh, July 2, 2020: – Haryana Government has asked all the Administrative Departments to issue necessary instructions to their field officers regarding effective implementation of the Jansahayak Mobile app.

Giving information in this regard, an official spokesman said that all the Administrative Secretaries, Head of Departments, Managing Directors, Divisional Commissioners, Deputy Commissioners and Registrars of Universities were directed to ensure implementation of Jansahayak Mobile App. He said that it is a one-stop mobile app for citizens who wish to seek any kind of services from the state. The Jansahayak application allows citizens to connect Haryana government for multiple services and their request will be submitted to concerned department and their district-level offices.

He added that to make the app operational, various Districts have been provided with login id and passwords. There is a help option for both Citizens and District Administration – they can share their issues or seek support on email id help.jansahayak@gmail.com. The spokesman further informed that the officers concerned have to ensure timely delivery of services to the citizens and it is necessary to fix timeframes for the delivery of services. Accordingly, the TAT (Turn and Around Time) for various services has been fixed. Also, the Field offices of various departments have to follow a certain Standard Operating Procedure (SOP) for each service they deliver. Such SOP has been finalized in consultation with the Deputy Commissioners.

The spokesman further added that the departments concerned also have to ensure communication between GAD and the District Administrations, a JanSahayak Support Team has been created at GAD Head Office. This team is in constant touch with District Administrations via Whatsapp Group named ‘JanSahayak – Implementation’. The Whatsapp group will work on pending requests – Escalations, any operational issues/testing/feedback of services, and other communications as per the requirement. In addition, citizen satisfaction and timely delivery of services is to be ensured, all Departments and their constituent Boards/Corporations, as well as field officials, are requested to ensure that the services are delivered within the specified TAT.