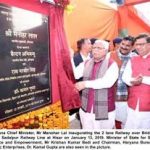 Chandigarh/Hisar, January 13,2019 :  The Haryana Chief Minister,  Manohar Lal inaugurated and laid the foundation of two important developmental projects in District Hisar today.
Manohar Lal dedicated people of Hisar, 613 meters long and 7.50 meter wide newly constructed two-lane railway over a bridge constructed at a cost of Rs 18.80 crore on the Hisar-Sadalpur railway line at Dabra Chowk. Along with this, he also laid the foundation stone of ROB and RUB of 1,185 meter long and 10.5 meter wide from Jindal Chowk to Surya Nagar.Chandigarh, January 13- Haryana Chief Minister, Mr Manohar Lal today inaugurated the Construction Skill Academy of Shri Vishwakarma Skill University at village Dudhola at Palwal. The Chief Minister also greeted the people of the state, on the occasion  Shri Guru Gobind Singh Jayanti, Lohri and Makkar Sakranti  and said that the University would prove as a milestone in providing the youth employment opportunities and making them self-reliant.
The Chief Minister was addressing the gathering in Palwal today.
He said that this is the country’s first  such unique university, where on doing a course, each student  would get employment opportunity  either in private or in  government sector.  He said that employment opportunities in government sector are limited but according to data, every year, two lakh educated youth   after their education comes in the line of unemployment in the state, hence, there is a need to increase the employment or self-employment opportunities in the private sector.
He said that Prime Minister, Mr Narendra Modi had launched Skill Development campaign to make youth skilful. Keeping this in mind, it was decided to set up Skill University in the state. The Prime Minister, Mr Narendra Modi laid the foundation stone of this university on November 19, last year. After this, the building of Construction Skill Academy was constructed in a short span of time. The university would be established in three phases, after which 12,000 students would get employment in government and private sectors with their skills. At the same time, there would also be short-term certificate courses.
The Chief Minister said that  the rate of Skill Development in India is 8 per cent, whereas 52 per cent in USA, 68 Per cent in England, 75 per cent in Germany, 80 per cent in Japan and China  and 96 per cent in South Korea. This university would work to provide new direction to skill development in India.
The Chief Minister entrusted the responsibility of the restoration of the pond of village Dudhola to the Vice Chancellor of University, Raj Nehru and announced to give Rs two crore to the Panchayat of village Dudhola for development works and for the construction of community center, vyayamshala and park. Similarly, he announced to widen the Dhatir road from Prithala from 7 mtr to 10 mtr and to send the demand of Prithala sub-tehsil to the state level committee.
After inaugurating the Construction Skill Academy, the Chief Minister reviewed the construction work of the University and offered floral tributes to Lord Vishwakarma. He said that the cost of construction of Construction Skill Academy is Rs 3.21 crore, in which 250 to 500 youth would be trained annually. Training would be given to 60 labourers in a batch. In the initial stage, the course of Mason and Barber has been started.
The Union Minister of State for Social Justice and Empowerment,  Krishan Pal Gurjar said that with the construction of this university, the region of Dudhola and its surrounding area would get its identity on the map of the country. He said that in the last four and a half years in Faridabad Lok Sabha area, various worked were carried out that included construction of secretariat in villages and sachivalay and vyayamshalas in the villages, widening the roads, fresh water for villages under the Raniwall scheme of Rs 185 crore, opening of women colleges in six villages, construction of elevated bridge in Palwal, extension of Metro, giving Mandal status to Faridabad, adequate price for crops and compensation and streets, drains in villages. At the same time, the government has set up FMDA, under which the system would be arranged that the revenue collected from the Faridabad district would be spent only on the development of Faridabad. Apart from this, the Metro Line would be set up between Faridabad and Gurugram for about Rs 6,000 crore.
Industries and Commerce Minister, Mr. Vipul Goel, said that this university is a gift for Prithla assembly constituency. This village has given 82 acres of land for the construction of the university. The buildings to be constructed in this university would be built soon.
Prithla MLA,  Tek Chand Sharma said that Shri Vishwakarma Kaushal University would make a special contribution in the overall development of this area.
Additional Chief Secretary, Skill Development,  Devender Singh said that so far 500 schools have been offered various courses by this University, which are getting good placement in various institutes. The Vice-Chancellor of University,  Raj Nehru welcomed the Chief Minister and other guests.
On this occasion, five MoUs were signed. Shri Vishwakarma Kaushal University (SVSU) signed MoU with Hero MotoCorp to work in the field of skill development for short-term programs, which will provide training to students in welding, machining, vehicle, auto mechanic trades. Another MoU was signed with SKH Metals Pvt. Ltd., with the SVSU, it will work in the field of skill development to run B.Voc/Diploma program in auto component manufacturing in this MOU. The Third MoU was signed by SKH Metals for Doctor and Mobile Medical Van.  This mobile medical van will visit village Dudhola once a week so that people can get its services. The forth MOU was exchanged with Ambience Facilities Management Private Limited. SVSU signed MoU for skill development sector for running a bachelor / diploma program in facility management. The fifth MoU was exchanged with Videocon software Private Limited on the use of the Videocon Digital platform as a pilot on a pro-free base.
IPRDH/2019