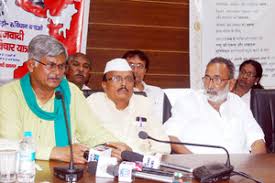 Chandigarh,20,2020: Haryana Governor  Satyadeo Narain Arya said that Haryana has been honoured with a Commendation Award (Krishi Karman Award) for enhanced promotion and production of oilseeds. The award was presented by Prime Minister Narendra Modi on January 2, 2020.

Satyadeo Narain Arya who was delivering his address on the first day of Budget Session of Haryana Vidhan Sabha here today said that his Government has with a renewed mandate been working on all fronts.

He said that a record procurement of 6.19 lakh metric tonnes mustard was done during the marketing season 2019-20. Besides 13,156 metric tonnes of sunflower were also procured. The entire payment at Minimum Support Prices for these crops was made directly into the accounts of the farmers.

The Governor said that to ensure complete transparency in procurement, all efforts are being made to procure a maximum quantity of crops through Farmer Registration Portal – Meri Fasal Mera Byora which utilizes four parameters, namely self-entry by farmers, e-Girdawari, verification by agriculture extension officers and authentication through satellite imagery. More than 6.40 lakh farmers have been registered in this mode for the ongoing Rabi season so far.

He said that during the current financial year, 93.60 lakh metric tonne of wheat was procured at Minimum Support Price and an amount of Rs 17,222.40 crore was paid to the farmers for it. During the Kharif marketing season 2019-20, 64.69 lakh metric tonne of paddy amounting to Rs 11,870.62 crore was procured at Minimum Support Price of Rs 1,835 per quintal. He said that the State Government is committed to ensuring that the farmers of major Horticulture crops get remunerative prices. Bhavantar Bharpai Yojana (BBY), insulates such farmers if market prices remain low. Twelve new vegetables namely, carrot, peas, brinjal, capsicum, ladyfinger, chilli, bottle gourd, bitter gourd, turmeric, cabbage, radish, garlic and 3 fruit crops namely guava, mango and kinnow have recently been included under this Scheme.

Arya said that the State Government is establishing Integrated Pack Houses for farmers for grading, sorting, packing, branding, value addition, storage and refrigerated transport of fruit and vegetables and is providing direct access to the market by eliminating intermediaries. We have established three such Pack Houses with a cost of Rs 14.36 crore and additional 52 such projects in various horticulture crop clusters with a cost of  Rs 181.72 crore that would be established in the year 2020, he added.

He said that his Government is also promoting Farmer Producer Organizations (FPOs) for collective input management, produce aggregation, management of their agri-business activities to increase their income. So far, 409 FPOs have been formed in various blocks in the State and it has been planned to increase the number to 1,000 by 2022. He said that to promote the judicious use of fertilizers, about 81.69 lakh soil health cards have been issued to the farmers. The Government aims to establish a soil testing laboratory in 111 Agriculture Market Committee Mandis and sub yards during this year. Apart from this, Block level soil fertility maps would be prepared on the basis of these test results. Haryana State Agricultural Marketing Board would also develop a Masala Market in Sersa Village, an Apple Market in Pinjore and a Flower Market in Gurugram, he maintained.

Arya said that in the interest of environmental protection, an extensive campaign was undertaken for the management of crop residue. About 1,672 Custom Hiring Centres have been established by providing 80 percent subsidy for machines. About 5,228 individual farmers have been given 50 per cent subsidy for in-situ crop residue management. Efforts have also been made to ensure marketing tie-up for ex-situ management.

He said that farmers of the State are being advanced crop loans without any interest if they repay the principal on time. Interest relief of Rs 127.88 crore was provided to around 5 lakh farmers on this account during the year 2018-19. He said that in a major relief to those farmers who could not repay their dues and had become defaulters of Primary Agricultural Cooperative Societies (PACS) and District Central Cooperative Banks (DCCBs), One Time Settlement (OTS) Scheme was started on September 1, 2019. Under the scheme out of about 8.50 lakh defaulter members of PACS, about 4.14 lakh members have availed the interest benefit amounting to Rs 858.77 crore up to January 31, 2020. Similarly in DCCBs out of 31,749 defaulter loanees, 7634 have availed the interest benefit amounting to about Rs 497.40 crore up to January 31, 2020. Similarly, under the ‘Recovery Linked Incentive Scheme’ of State Cooperative Agriculture and Rural Development Bank, 10,564 loanees who were hitherto defaulting have availed the benefits of Rs 83.08 crore from September 1, 2019, to January 31, 2020.