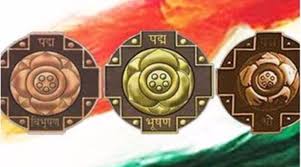 Mohali: Haryana government has invited nominations for the Padma Awards, namely, Padma Vibhushan, Padma Bhushan and Padma Shri, which are among the highest civilian award to be announced on January 26, 2021, on the occasion of Republic Day.

An official spokesman said that in a letter sent by the Chief Secretary to all the Additional Chief Secretaries, Principal Secretaries, Divisional Commissioners, and all the Deputy Commissioners of the state, recommendations for the Padma Awards were sought in PDF format, which are to be sent on the site of cs@hry.nic.in. by August 10, 2020. The recommendations received after the due date will not be considered. He said that with each recommendation, complete with name, address, date of birth, details of major events of that person’s life and his current occupation or position, along with letter in both Hindi and English languages filled in the requisite performa so that it can be published. A Special Search Committee can be constituted to identify, consider, and finalize their recommendations or nominations.

He said that the persons recommended should be pre-eminently worthy of the Awards, looking at their lifetime achievements. The criteria of selection should invariably be ‘Excellence Plus’ and the highest standards should be applied while recommending persons for these awards. The existence of an element of public service in the achievements of the person recommended for the award would be a desirable factor. As the Padma Award is the second-highest civilian award of the country, it should be considered whether the recommended person has earlier been given any National award or a State award in his or her respective field. Efforts should be made to identify talented persons from amongst women, Scheduled Castes and Scheduled Tribes, Divyang persons, etc who deserve to be considered for the award. He informed that government employees, including employees working in public sector undertakings, will not be eligible for the Padma Awards, except for doctors and scientists.

He said that the Padma Awards namely Padma Vibhushan, Padma Bhushan and Padma Shri are the highest civilian awards in the country. Instituted in the year 1954, the award is given every year on the occasion of Republic Day. These awards are given for distinguished and exceptional achievements or service in all fields or disciplines, such as Arts, Literature and Education, Sports, Medicine, Social Work, Science and Engineering, Public Affairs, Civil Service, Trade and Industry etc. He said that all persons without distinction of race, occupation, position or gender are eligible for these awards. A copy of the statutes and rules governing these Awards is also available on the website: www.padmaawards.gov.in.

The spokesman said that nominations or recommendations for the Padma Awards will be received only on the online portal www.padmaawards.gov.in designed for this purpose. The nominations or recommendations should contain all the relevant details specified in the format available on the portal, which should clearly indicate the person’s distinguished and exceptional achievements or services in their respective field or discipline. While recommending a person online it should be ensured that all the required details are properly filled. Information about the steps to be taken to make an online recommendation is available on the website.

He said that it has been observed in the past that while nominations are received in respect of a large number of persons; there could, however, be several talented persons who are left out of consideration despite exceptional contribution in their field. Often many such people may get overlooked primarily for the reason that they may not seek publicity or attention in the public domain. It is, therefore, requested to make concerted efforts in identifying such persons whose excellence and achievements deserve to be recognized and make suitable nominations in their favor. It goes without saying that recognition of such deserving persons will only add to the prestige of these awards.