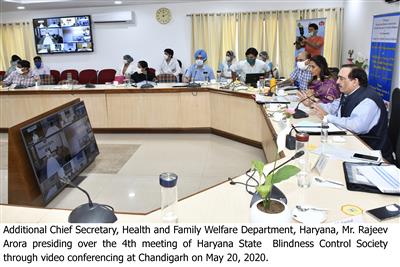 By YS.Rana :
Chandigarh— Three ambitious health-related programs were launched in Haryana
on Wednesday including H1N1 Vaccination Campaign for Health Care
workers, Hepatitis-B Control Program under National Viral Hepatitis
Control Program and Eye donation centres in 21 District hospitals of
the State. With this, free of cost Hepatitis-B screening, diagnosis,
and treatment will now be available to the people of the state.
Additional Chief Secretary, Health and Family Welfare Department, Haryana, Rajeev Arora, after inaugurating these three programmes, addressed the civil surgeons and representatives of
various hospitals from different districts of the state through video conferencing and said that the percentage of population suffering from Hepatitis B should be ascertained and directed them to prepare a work plan to deal with it.
Arora said that in the first phase of Hepatitis-B control program, newborns, pregnant women and inmates in state jails should be covered. Also, it should be implemented in districts like
Sirsa, Hisar, Fatehabad, Gurugram and Faridabad, he added. He directed the concerned officers to increase the Hepatitis-B screening facility in the state and check maximum number of people in the affected districts. He said that after preparing a detailed action plan of  Hepatitis B control program and National Program for Control of Blindness and Visual Impairment, both the programmes will be duly implemented from the month of August. He said that due to COVID-19 pandemic as the Health Department has come into focus due to which there has been mobilization of health workers across the state and public awareness regarding health has also increased so this time should be used productively to achieve the goals of these programs.
He said that in India, since 2016 about 85000 persons are being infected by the H1N1 virus and 4900 deaths have occurred in the last few years. India usually witnesses two peaks, one during January to March and another in post monsoon between August and October, he added. He said that this infection is primarily spread through respiratory droplets acquired through coughing, sneezing or touching
an object having droplets on it. H1N1 infection can affect any age and
gender, he added.
He said that health workers fall in the high-risk category and require special attention. Around 13,000 health workers across the state will be vaccinated as a campaign. For this, the vaccine that is planned to be used is a single dose vaccine and is effective for a period of one year. He informed that all the 22 districts in the state
are being provided free H1N1 testing, diagnosis and treatment services
already. He also stressed on the safety of health workers dealing with
infections like H1N1 and COVID-19, etc.
Rajeev Arora said that hepatitis is a serious liver disease and Haryana is committed towards elimination of Hepatitis C by the year 2030 as per the Sustained Development Goals (SDG) of United Nations and also to reduce morbidity and mortality associated with Hepatitis B and C. He said that to achieve this, the state has set a target to screen 4 Lakh people including High Risk Group (HRG’s) at
ICTC and ART centres in 2020-2021 and all positive patients will  be
provided free treatment in the State.
He said that under the NVHCP program, hepatitis-C is already being provided free treatment, diagnosis and treatment facilities in all the 22 district civil hospitals and all the jails of the state which are designated as treatment centres. He said that now the Hepatitis-B patients in the state will also be provided the same
facilities.
He said that under the National Program for Control of Blindness and Visual Impairment (NPCB & VI), Eye Donation Centers which have been set up in 21 district hospitals of the state have also been started. He said that the main objectives of National Program for Control of Blindness and Visual Impairment is to reduce preventable blindness in Haryana, enhance community awareness on eye care and to
secure co-ordination between Government Health facilities and Medical
College.
He said that the State Government is committed to ending the corneal blindness backlog from the state. Emphasizing the importance of eye donation, he urged the public to come forward for this noble cause and said that the role of non-governmental organizations and private practitioners is crucial for achieving better results in
preventable vision impairment.
He said that three new ‘Eye banks’ will be started soon in Karnal, Khanpur and Mewat medical colleges. He informed that all the 68 eye assistants in the state have been trained in cornea collection to overcome the shortage of doctors. He said that anyone can call the toll-free number 108 for eye donation.
On this occasion Mission Director, National Health Mission, Prabhjot Singh, Director General Health Services, Dr. Suraj Bhan Kamboj and Director, Health Services, Dr. Usha Gupta and other senior officers of the department were also present

Haryana decides to open offices at all Government Schools
Haryana sends 1.87 Lakh migrants to their homes till date
Comment