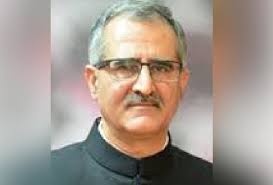 Dhesi instructed the officials concerned to ensure adequate availability of electricity during the summer as well as to ensure that electricity does not fluctuate.

Among those present in the meeting were HERC Director (Technical)  Birender Singh, SLDC Chief Engineer (System Operation) Sunil Sethi, Superintendent Engineer,Rajiv Kaushik along with the entire team of the engineering wing of State Load Despatch Centre.

Wrote a letter to revert the modification of Plastic ban Notification