SHIMLA—Laws are not based on faith but sometimes faith works better than the fear of law. While scores of laws are there still green cover continues to deplete across the country but here in Himachal Pradesh recorded a 25 percent increase in its green cover. Notably, 1000 percent in Lahaul and Spiti district between 1991 to 2015 due to hectic plantation initiatives of the state government and god-fearing public of the hill state. It is revealed in an analysis report by the State Centre on Climate Change.

Kinnaur is the only district of the State which has recorded a decline in green cover during this period because of the construction of hydropower projects and other anthropogenic activities. It stated that dense forest cover in Kinnaur decreased from 565 square kilometers to 344 square kilometers during this period, a decline of 39 percent. On the other, districts Hamirpur, Kullu, Shimla and Sirmaur have also witnessed a declining trend in the dense cover area.  On the other hand, district Solan has recorded an increase of 459 square kilometers from 164 in Solan district including remaining districts. 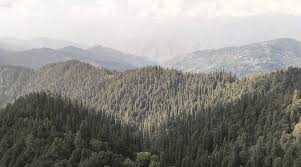 The report also recommended the protection of the state rich natural resources as the state existed unlimited scope for intensification and diversification of the forest cover.

Out of the total geographical area of 55,673 square kilometers, the state has a recorded forest area of 37,o33 square kilometers (66.52 percent) and a forest cover of 27.72 percent which accounted for 15,433.52 sq.  km as per India State of Forest Report, 2019. The official of the forest department admitted that urbanization, hydropower projects, increase in tourism and expansion of state and national highways continuously put pressure on forest resources but compensatory afforestation management is helping to lessen the pressure.

The findings of the research paper titled “Socio-Religious Role of the institution of village Gods in the Western Himalayan Society” have also recognized that village gods have also played an important role in protecting forests. It says that 66 percent of people in five districts—Shimla, Sirmour, Kinnaur, Kullu and Mandi– said that they did not cut even a tree without the permission of the gods.

It is estimated that there are over 8,000 sacred forests across the country. Of these, around 5,000 are in Himachal Pradesh. As the country feels the environmental strain on land resources for various reasons, ecologists recognize the sound scientific reason of survival of living tradition into the modern age. While thousands of acres of forests are being razed in the name of development, local faith and legends associated with forests will go a long way in preserving these from plunder in the state.