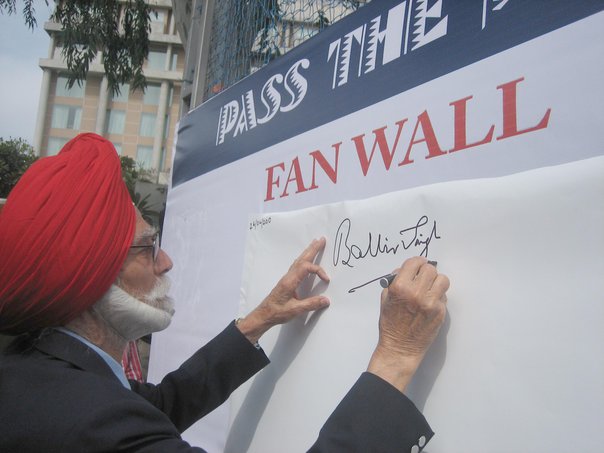 Y.S.RANA:
NEW DELHI,– Hockey India expressed their deepest condolences on the sad demise of Hockey Legend Balbir Singh Sr who breathed his last on Monday morning iMohali. The triple Olympic Champion and 1975 World Cup-winning team manager had been battling for life since  May 8, 2020 when he was hospitalised, according to FIH news.
Balbir Sr was the most decorated athlete in Indian sports history with Olympic medals in 1948, 1952 and 1956 Summer Games. He coached the Indian team which won the bronze medal at the 1971 World Cup and was manager of the Indian team that won the Gold Medal at the 1975 World Cup. The Indian players attended the coaching camp at the Panjab University campus in Chandigarh for the Kuala Lumpur World Cup.Balbir Singh, who was the Sports Director, Punjab had scored five goals in India’s 6-1 victory over the Netherlands in the gold medal match of the1952 Helsinki Olympics. Under his Captaincy, India scored 38 goals and conceded none on its way to the Gold medal in 1956 Melbourne Olympics.
Beating England 4-0 in their own backyard during the Final of the 1948 Olympic Games as an independent nation was Balbir Sr’s ‘greatest moment’. “Today, we have not only lost our greatest hockey legend but we have also lost ‘our guiding light’. While his achievements in the post-independent era have been well-documented, Balbir Sr remained the greatest fan of the sport and was always there when we needed his advice. Hockey has lost its brightest star and everyone at Hockey India is pained by this news,” expressed Mohd Mushtaque Ahmad, President, Hockey India.
He further added, “Balbir Singh Sr’s exemplary achievements, his passion for the sport, his life as an icon of the game will remain an example for generations to come. On behalf of the Federation, I express my deepest condolences to his family.”
Hockey India’s Secretary General Rajinder Singh too expressed his condolence. “Balbir Sr’s achievements in hockey cannot be emulated. It is difficult to mention him in past-tense because for us he was always there.
One could call on him for advice at any time, his spirit and adulation for the game will be missed. I am sure even in his absence, his life as a hockey legend will inspire many generations,” stated Rajinder Singh.
For Balbir Sr’s stellar contribution to the game, Balbir Sr was awarded the Padma Shri, India’s fourth-highest civilian honor in 1957 and was conferred with the Major Dhyan Chand Life Time Achievement Award by Hockey India in 2014. Balbir Sr also became the only Asian male and only Indian among 16 athletes to be chosen as “Iconic Olympians” by the International Olympic Committee across the modern Olympics’ history.
*INDIANAPOLIS (USA):* World-renowned artist and community leader in Indianapolis, USA, in a condolence message said “We heartily applaud and are grateful to the. legendary Balbir Singh for his great achievements as the triple Olympic hockey gold medalist. May his soul rest in peace and his legacy continues to inspire future generations.”
Balbir Singh Senior signing the Fan Wall at a function at The Taj in
Chandigarh in 2010.–