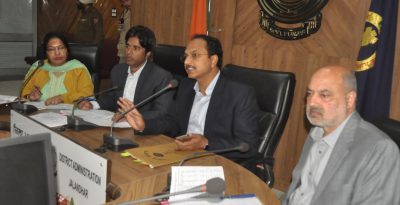 Jalandhar: The Deputy Commissioner Jalandhar Varinder Kumar Sharma today asked the officers of the various departments to pull up their socks for House listing and Housing Census and updation of National Population Register (NPR) schedule to take place in the district from May 15th to June, 2020.

Chairing a meeting here today at the District Administrative Complex, the Deputy Commissioner said that this mammoth exercise was aimed at recording the facts and figures to minutely prepare the policies for the socio-economic growth of the country on one hand and ensure the well being of the people on the other.

He said that so this work of census was of utmost significance and the entire administration was duty-bound to perform this national duty zealously. Sharma said that this work must be accorded topmost priority to ensure that the national exercise was completed in a foolproof manner in the district.

He said that Enumerators and Supervisors were the primary census functionaries responsible for collection of data during both these phases of a census.  Sharma said that an enumerator would be assigned the workload of about 650-800 population or 150-180 census houses adding that one supervisor would be engaged for every six enumerators.

The Deputy Commissioner asked the Tehsildars and the Executive Officers, who were the Census Charge Officers in the district, to update the data base of the Enumerators and Supervisors for his/ her charge. He further said that Special Charge Officers have to be appointed for carrying out this operation at base camps of Armed Forces and Para Military Forces besides Slum area.