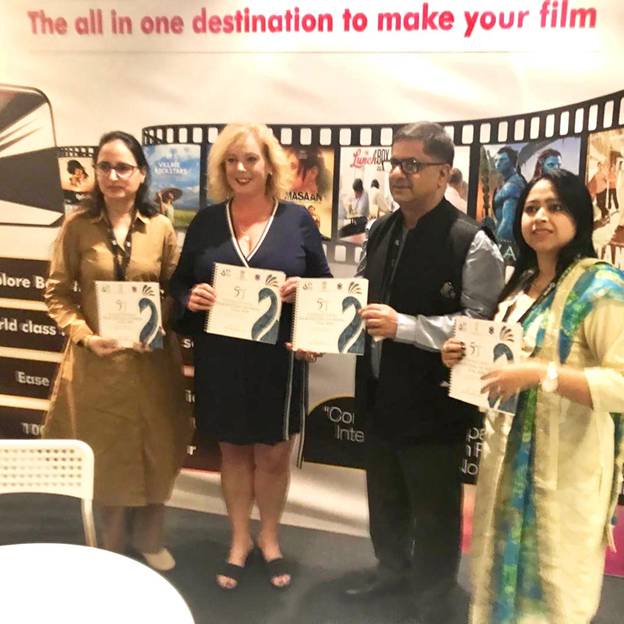 New Delhi,September 7,2019:As part of the outreach for the Golden Jubilee edition of International Film Festival of India (IFFI), the Indian Delegation at Toronto International Film Festival (TIFF) 2019 met with a number of Key Stakeholders from the international film-making industry and apprised them of the proposed festival architecture. The meetings were held in the India Pavilion set up  by Ministry of Information & Broadcasting. Ms. Lisa Macleod, Minister of Tourism, Culture and Sports, Toronto, Ontario was amongst the prominent personalities to visit the India Pavilion. The Minister was apprised of the activities of IFFI 2019 & India celebrating its 50th anniversary.

Earlier in the day, the Indian Delegation met Ms Viviana A. Dirolli, Executive Director, & Mr Diego Marambio Avaria, International Affairs Coordinator, INCAA (Instituto Nacional de Cine y Artes Audiovisuales) – the National Institute of Cinema and Audiovisual Arts, Argentina. The objective of the meeting was to seek out INCAA’s help to reach out to Argentina Government for IFFI 2019, potential of exchange between the countries and possibility of co-production treaty between India & Argentina. Indian Delegation apprised them about all the policy initiatives & framework of Indian Government, ease of shooting and launch of the Web portal – www.ffo.gov.in – for online application for shooting at a single point. Further they were notified of the preparations that were undertaken by the Government for the 50th anniversary of the IFFI.

INCAA expressed that India should participate in the premiere film festival of Argentina –  Mar del Plata International Film Festival 2019 and also in Ventana Sur 2019, which is attended by the entire Latin American community, with a possible Indian Delegation to Argentina to initiate dialogue on co-production between the two countries.