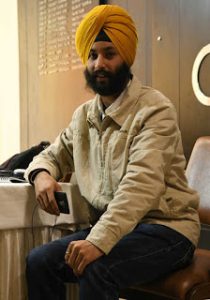 CHANDIGARH—Hansjeet Duggal, a Chandigarian filmmaker, now based in California, has been telling stories of the Indian and Punjabi Diaspora and telling the stories of their contributions, achievements and struggles to the communities abroad and at large in the United States.

Shades of Indigo–Sam Dhaliwal is a Sikh farmer who migrated to America in 1976. Starting with just ten acres of land, and overcoming white supremacist attacks, Sam today owns over 400 acres of farmland in Bellingham, Washington. However, this isn’t just an immigration story. The passion that the entire Dhaliwal family has towards agriculture can be seen in every step of their journey. Sam’s son Rob Dhaliwal continues to be involved in the farm operation after receiving a degree in horticulture.

With Sam’s experience and grit coupled with Rob’s academic approach and technological awareness, the Dhaliwal’s today have broadened into verticals of processing and packaging their harvest. They even hire documented migrant labor as a way of giving back.
Climate change and local summers that have been punctuated by record-breaking heatwaves and have had deleterious effects on crops. Despite all they have to contend with, the Dhaliwal continuing to strive to give back to their adopted homeland and its people.
Hansjeet led the team and filming took place in the beautiful coastal city of Bellingham in Washington State. The movie was very well received in Southern California, Seattle and more screenings are scheduled for the coming year. Hansjeet was elemental in striking the distribution deal with PBS Seattle KCTS9. The documentary will soon be airing on KCTS9.
Jallianwala: Repression and Retribution–“Jallianwala: Repression and Retribution”, is a film based on new artwork by contemporary British artists, The Singh Twins. The artwork itself is designed in three parts as a triptych. The center panel largely focuses on the massacre – namely, the moment on 13th April 1919, when a soldier of the British Raj, Brigadier-General Dyer, ordered his troops to open fire, on a peaceful demonstration of unarmed Indian civilians in the city of Amritsar, Punjab in northern India.
The left panel focuses on the historical context of Jallianwala. In particular, it emphasizes how the motives, methods and unremorseful attitude of Dyer towards the massacre of innocent civilians whom he described as ‘mutineers’, reflected an established mindset of Imperial superiority.
The right panel explores the impact of Jallianwala in terms of how it acted as a catalyst for India’s freedom struggle and the story of Shaheed Udham Singh – the Punjabi Sikh who made it his life’s mission to avenge the atrocity committed against his countrymen.
The Singh Twins narrate the film and discuss their research into Jallianwala and their efforts in the creation of this artwork.
Hansjeet led the team and produced this movie in close collaboration with world-renowned artists The Singh Twins. The movie was very well received in Southern California, Seattle & more screenings have been planned throughout the USA. And since it is the centennial of Jallianwala Bhag this April, we are currently in talks with BBC for distribution.
The 51 percent (working title)–The 51per cent is a feature-length documentary on Women’s movement in collaboration with San Diego State University since this April 25th, 2020 is their 50th anniversary for establishing the First Women’s studies department in the USA.
The United States experienced an immense cultural change in the 1960s and 1970s. Civil rights, anti-war, lesbian and gay rights, and women’s movements were mass displays of social unrest that urged groups of people to join together to protest political and societal injustices within local and national communities. The women’s movement of that time was based on the foundation of political and social equality. Ubiquitous public forms of sexism betrayed deeply rooted inequalities in private settings, and women began to question the gender roles enforcing their traditional positions as wives, mothers, and homemakers.
In The 51 percent we will follow the journey of the Women’s Liberation Movement, SDSU’s Women’s Liberation Group, the establishing of a Women’s Studies Program, the creation of new knowledge with multicultural & noninstitutional settings ~ it’s implications and the cross-fertilization of the community & the academy.
The team led by Hansjeet for this feature documentary, we are in the advanced stages of pre-production where we are scheduling the interviews, organizing archival footage and setting up the structure, said he and added he was in talks with PBS San Deigo KPBS for distribution.

The Author Yadavinder S Rana is a Senior Journalist.

Your real self prevails in life

Digital India Initiatives a Hope for Poor and Developing Countries

Mythos of ineluctable expression of FREEDOM

Nature—mother of all but child of none