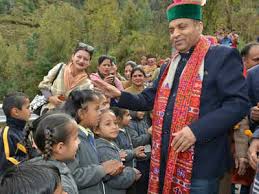 Shimla, November 14, 2019: Four-day long international Lavi fair at Rampur Bushahr concluded today with much fanfare and gaiety with Chief Minister Jai Ram Thakur presiding over the closing ceremony. While addressing the gathering on this occasion, the Chief Minister said that international Lavi fair besides being historical was also known for its trade with Tibet, China and other countries and was an inseparable part of the lives of people of the region. He said that for about three centuries this fair was celebrated as a trade fair. He congratulated the people of the area to upholding the rich culture, traditions and customs of the fair. Chief Minister said that the present State Government from day one was working with a sole objective, which was developed without any tendency of vendetta and vengeance. He said that the biggest achievement of the State Government was to win the confidence of the people of the State. He said that the Global Investors’ Meet organized by the State Government was a major initiative to attract investment in the State.

It was unfortunate that opposition leaders were criticizing this initiative of the State which shows their double standards, he added. Chief Minister said that the state government was according to top priority to the development of the Rampur area and during the last about two years Rs. 260 crore was spent on construction of roads, bridges, buildings and other infrastructure. As many as 15 villages had been connected with roads besides constructing five bridges and 22 buildings and completing the metalling and tarring work of 140 km roads. In addition to this, 33 DPRs worth Rs 133 crore and 16 DPRs worth Rs 126 crore had been approved for roads and bridges in the area and submitted for approval.

Jai Ram Thakur said that the present State Government had completed almost two years in office and it was a matter of great satisfaction that people had given wholehearted support to the government. He said that the BJP won on all the 68 assembly constituencies in the State including Rampur in this year’s Lok Sabha elections. He said that Article 370 has now become a history with Prime Minister Narendra Modi led Central Government taking a bold decision to scrap this Article. He also welcomed the decision of the Supreme Court on Sri Ram Janambhumi which would pave the way for the construction of a majestic Sri Ram temple.

Education Minister Suresh Bhardwaj said that Chief Minister Jai Ram Thakur was ensuring that every section of the society and every area of the State get its due in a matter of development. The government was giving special stress on the development of those areas which had remained neglected so far. He said that during the last two years 7500 teachers have been recruited in the State which was a record in itself. Chief Whip Narendra Bragta said that the State was forging ahead on the path of progress and prosperity under the leadership of Chief Minister Jai Ram Thakur.

He said the Global Investor’s Meet organized at Dharamshala was bound to transform the economy of the State.MP Ram Swaroop Sharma said that the double engine of the Centre and State Government had ensured that Himachal Pradesh emerges as the front runner State of the country in matter of development. Local MLA Nand Lal detailed various demands of the area.BJP leader Prem Singh Draik also spoke on the occasion and thanked the Chief Minister for dedicating developmental projects worth crores of rupees in the area. Deputy Commissioner Shimla and Chairman of the organizing committee of the Lavi fair Amit Kashyap gave a brief account of the history of the Fair.

Addressing the people at Sarahan, the Chief Minister said that the state government would open degree college at Jeori as soon as land was made available. He also listened to public grievances on the occasion. He inaugurated Rai Khhd bridge constructed at a cost of Rs. 8.20 crore and Aerly to Majohli and Swan to Doi roads constructed under PMGSY. He also laid the foundation stone of Kharela to Karangla road to be constructed by spending Rs. 7.15 crore.  He inaugurated Sub Division Office at Nankhari under Electrical Division, HPSEB Ltd, Rampur Bushahr which would benefit 17 Panchayats of the area. He also laid the foundation stone of lift water supply scheme Gori to Chamba and Dharunjaya Kungal Balti.