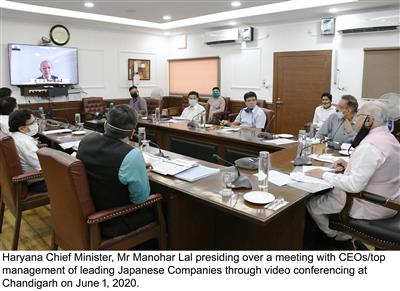 Chandigarh June 1, 2020: “One thing that has not changed in the newfangled post
corona world, it is the strength of Japan-Haryana heart to heart
connect”. This was the consensus conclusion in the video conference
chaired jointly by Haryana Chief Minister, Manohar Lal and
Satoshi Suzuki, Ambassador of Japan to India here on Monday. It is
organized by JETRO (Japan External Trade Organization) in which 35 top
Japanese investors and CEOs of Japanese companies participated.
While describing Haryana as a favourite destination for
foreign investors, a large number of leading Japanese companies
including Honda, Maruti Suzuki, Canon, Daiken, NEC Technologies,
Mitsui, Unicharm, Munjal Kiriu who already have their bases in Haryana
evinced keen interest in making further investments in Haryana through
expanding their industrial units. Manohar Lal recalled that though
most of them had met recently on February 15 over Japan Haryana Golf
meet yet it seems it was in a different era. He also shared various
new initiatives are taken by the State Government to woo foreign investors
including allotment of land to manufacturing units on lease basis and
upcoming Enterprises Promotion Policy -2020 which would be the best
policy in the country.
The Chief Minister said that the adverse human, social,
fiscal and economic impacts of the lockdown measures unfolded every
day. Like all governments across the world, Haryana tried its best to
mitigate the problems. While sharing something that has been uniquely
local in Haryana, he said that while we remained focused on ensuring
no one slept hungrily and on reducing the spread of the virus, we never
saw this crisis as only a crisis but as a great opportunity to reform.
He said that from March to May, the State Government has set
up 3 brand new Departments namely Department of MSMEs; Department of
Housing for All and Department of Citizen Resources Information. Also,
addressing the concern of high land prices, we have added a new
investor-friendly element of land allotment for manufacturing units on
a lease basis. He said that they were not looking at incremental reforms
but a quantum leap. He said that Haryana would not be found wanting on
any of four aspects of this package; Land, Labour, Liquidity and Laws.
The Chief Minister said that some investors were talking
about VIP Countries (Vietnam, Indonesia, Philippine). My team at State
was now focusing not just on investor satisfaction, but on
customer delight. Haryana is not just limited to B to B (Business to
Business) or G to B (Government to Business) or G to G (Government to
Government) relationship. Haryana is the land of Gita and we believe
in H to H relationship that is Heart to Heart connect, the Chief
Minister asserted.
He said that Haryana has been witnessing the large expression of
investment interests coming from Japanese companies, therefore, it
becomes all the more important for us to maintain continuous and
effective dialogue. He said that the State Government has recently
established separate departments for Foreign Cooperation, MSME sector
for their help and continued support. He advised the Japanese
community to think about establishing the supply chain and MSME with
research and innovation in Haryana. He also sought their continued
preference and investments for the State while assuring all support of
his team.
The CEO of the leading Japanese Companies thanked the Chief
Minister,Manohar Lal for taking this proactive step of interacting
with them through video conference and said that this step would go a
a long way in further strengthening the industrial and economic
relationship between Japan and India and particularly with Haryana.
By Yadavainder S.Rana:
yadavindras@gmail.com