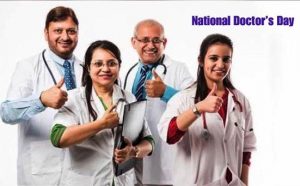 India celebrates the Doctor’s Day on July 1 every year. The day is celebrated on different days in different countries which dedicate the day in commemoration of their famous physicians who created a niche for themselves in the field of medical sciences. India observes the day both as the birth and death anniversary of its stalwart physician Dr. Bidhan Chandra Roy, a Bharat Ratna awardee.

He was not only a noted physician of his time but a great educationist, philanthropist and freedom- fighter and former chief minister of West Bengal. He is one of the few people to have achieved the rare feat of obtaining Fellowship of the Royal Colleges of Surgeons (FRCS) and Membership of the Royal Colleges of Physicians of the United Kingdom (MRCP, UK) simultaneously. He was born on July 1, 1882 in Patna and died at the age of 80 on July 1, 1962 in Calcutta (Kolkata). The government of India started to observe the day in his memory in the year 1991. Hence, the day is called our National Doctor Day.

As the nation braces to celebrate the day on Wednesday, the corona cases have already crossed the ignominious mark of 10 million as the pandemic has tightened the noose on the world. Every country is struggling badly to come out of the pandemic with every day becoming a chilling reminder that the present global disease of the modern era is slipping out of hands. It has caught the medical science off guard as the medical forces all over the globe are trying their level best to come out with an effective medicine or vaccine to save the world from the corona scare.

However, the exemplary role that the doctors, nurses and other medical fraternity have played during these disastrous times, have earned them a huge respect in every society of the world. In India, the doctors and the medical care teams have battled it out day and night to attend to the sick and they have literally saved the nation from the quantum of corona threat that had been looming over the Indian sub- continent since March 2020. The WHO had warned an exponential surge and spread of the virus that would wipe out especially the old and frail population of India. But medical personnel have fought this battle hard to avoid the immeasurable loss that could have taken away many lives. So, they have rightly earned the title of WHITE WARRIORS.

Barring this paranoid time of corona virus, which continues to wreak havoc, the doctors have always been seen as gods who with their merciful hands can cure even the hopeless patients. We have seen them instil a new lease of life in the most critical cases. They are the ones who give relief to the troubled and the sick. Medical sector is generally termed as a noble profession, the chief aim of which is to provide the best of health care to enable every creature to live a healthy and dignified life.

But of late, the pious profession has witnessed a considerable degradation, for some greedy and unscrupulous elements have run their nefarious designs resulting into malpractices. The quality and rates of medicines has been under the scanner all the time. The nexus between the medicine companies and the doctors is an open- secret now. The commission system and the doctors joining hands with chemists, testing laboratories and diagnostic centres have resulted into medical mafia thriving unabatedly in the system. This has damaged the image of the doctors and other medical professionals badly. The entry of quacks has furthered dented the nobility of the profession.

Post Script – No doubt, medical is a noble profession. To be a doctor takes a lot of hard work. Doctors are the true saviours of the masses and they are the most important cog in the vast machinery of medical and healthcare. In the present situations, the doctors have emerged as the true caretakers of the people. They have donned a new avatar of the Covid warriors. It is hoped that they have restored their lost respect that they once enjoyed before the onset of malpractices that eclipsed the image of doctors in the eyes of common people. Indeed, the doctors have played a crucial role in dealing with corona and their role can never be forgotten. But it is also high time the black sheep in this profession should learn their lesson. More than the government, which is expected to make tough rules to stop malpractice in medical profession, it is the doctors who should give precedence to following the ethics of the profession in a true spirit. However, Let’s hail the white warriors for their exemplary services during corona on this national Doctor Day. That’s just what the doctor ordered!