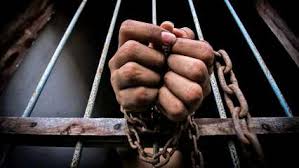 New Delhi, Feb 27, 2019: The Special Judge-I, CBI Cases, Mohali (Punjab) has today sentenced Sh. Harjinderpal Singh, then SHO, Police Station Sadar, Ropar (Punjab) to undergo life imprisonment with fine or Rs. 5 lakh (out of which Rs. 2 lakh each to be paid to victim family as compensation) and then ASI Avtar Singh & then ASI Bachan Dass both to undergo probation for one year with Litigation expenses of Rs. 20,000/- each.

This was stated by RK.Gaur Spokesperson of the CBI today. He said CBI had registered a case on 04.07.1997 U/s 302, 307 of IPC, 25/54/59 of Arms Act against unknown persons and took over the investigation of FIR earlier registered at Police Station, Ropar on the orders of Punjab & Haryana High Court in a Criminal Misc. No.19259-M of 1996 filed by the wife of late Kuldeep Singh resident of Village Lodhi Majra, District Ropar (Punjab). It was alleged in the FIR of Police Station Sadar Ropar that Shri Harjinderpal Singh SHO, Sadar Ropar arrested accused Kuldeep Singh and Gurmail Singh in another case. He took both accused for alleged recovery of ammunition/explosives u/s 27 of Evidence Act. Both the accused persons were alleged to have been killed at Sangraon river near Village Bhadal in the cross firing made at the police party by unknown persons.

During CBI investigation, it was established that the accused Police officials of Punjab Police falsely shown the arrest of Kuldeep Singh & Gurmail Singh and subsequently killed them in the alleged fake encounter.

After a thorough investigation, CBI filed a charge sheet in the Court of SJMIC, Patiala (Punjab) against the then DSP (D); the then SI/SHO, Police Station Sadar, Ropar; two Assistant Sub Inspectors; one Head Constable and one Constable.

The Trial Court found three accused guilty and convicted them. The then DSP (D), then Head Constable & then Constable was acquitted by the Court.

CBI files chargesheet against 8 accused in murder of Yogish Gowda

Big victory for CBI and big jolt for Vijaya Mallya