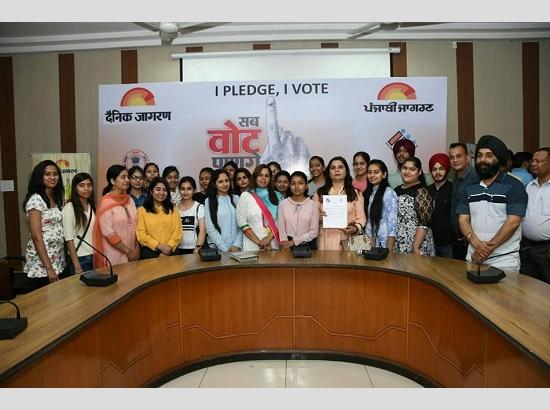 Ludhiana, May 14, 2019: In view of the upcoming Lok Sabha 2019 elections, the district administration and Dainik Jagran group organised a voter awareness function in which students and members of NGOs were administered oath to vote in a free and fair manner on May 19, 2019. District Election Officer-cum-Deputy Commissioner Pradeep Kumar Agrawal was the chief guest on the occasion.

While speaking on the occasion, Pradeep Kumar Agrawal urged the residents to exercise their right to vote in a free and fair manner. He said that district administration has already organised several functions related to voter awareness in the district. On this occasion, the participants took oath to vote in the upcoming Lok Sabha elections in a free and fair manner.

He informed that this time, VVPAT machines would be installed along with all EVM’s, where the voter would be able to see for 7 seconds the name and a serial number of the candidate he/she has cast his/her vote.