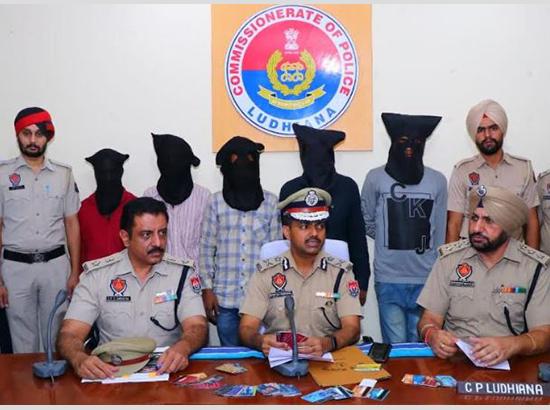 Ludhiana , October 24, 2019 : Gang kingpin Rohit Sama, 37, of Jain Colony, Daba; Rajesh Kumar, 24, of Makkar Colony, Giaspura; Visakha Singh, 30, of Dehlon; Shankar Kumar, 27, and Shubham Randhawa, 20, both residents of Mohalla Hargobind Nagar, Gisaspura; were nabbed from Moti Nagar on a tip-off on Monday. “They were planning to loot an ATM machine in Sherpur when cops raided them,” said commissioner of police (CP) Rakesh Agarwal.

The gang, from whose possession 56 debit cards were recovered, confessed to have duped 70 people of Rs 1.50 crore in two years. FIRs, however, were registered in 46 cases, he added.

About their modus operandi, the CP said, “The gang members would stand around ATM kiosks, waiting for their targets. Their prey included elderly and less-educated people. Offering to help them withdraw money, the cheats would either ask their debit card’s PIN code or notice it while they entered it. Soon thereafter, they would cancel the transaction and tell them the machine was not accepting their card and that they should go to another ATM.”

The fraudsters had debit cards of different banks and colours. “While returning their target’s card, the cheats would swiftly swap it with an identical fake one. And once their prey left, they would withdraw cash from their accounts,” the CP added.