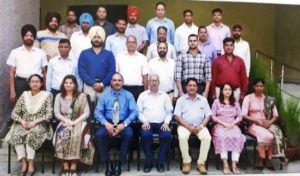 Major Pardeep Kumar, who has been serving as a widely respected trainer in the Punjab Education department for the past many years performed this responsibility very successfully with utmost dedication and sincerity. After returning from this successful endeavor at one of the most respected Training institution of India, i.e Mahatama Gandhi State institute of Public Administration, Punjab at Chandigarh shared his experiences with us.

He informed that this was a five day- Residential programme for National level training officers. There were 21 officers who participated in this programme. The participants included One Indian Economic Services Officer, a PCS officer of labour Department Punjab, a Senior Commandant of RSPF, Fifteen officers Of Punjab Police Academy Phillaur and Jahan Khelan and Bahadurgarh, a Deputy District Attorney , A veterinary Officer , A Lecturer from GPC , Punjab officials including many senior trainers from leading training institutes of the state.

He told that this programhas been designed by Thames Valley University, London and with all humbleness he shared that it has indeed been an honour to conduct this program that has worldwide acceptance and recognition.

The entire education community and intellectuals of the district congratulated him for bringing laurels to the state as well as department. He credited this honour to his seniors and colleagues who always motivated him to work hard and set an example.