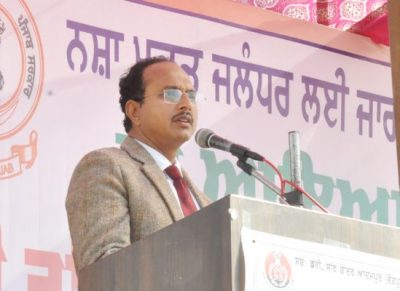 Presiding over a function to under the Drug Abuse Prevention Officer (DAPO) campaign here today, the Deputy Commissioner, accompanied by Additional Deputy Commissioners Kulwant Singh and Mr. Jasbir Singh, said that the district administration was firmly committed for making Jalandhar a drug free district. However, he said that this goal could not be achieved without the active support and cooperation of the people. Sharma said that no stone would be left unturned for accomplishing this noble task.

The Deputy Commissioner unequivocally said that Punjabis have been blessed with an indomitable spirit to excel even in hostile conditions. Citing the examples of terrorism, he said that Punjab overcame even those ‘dark days’ due to the firm commitment and resolve to make the state a peaceful and progressive state. Sharma urged the people to revoke the same spirit to ensure that the problem of drug was completely eliminated from the district.

The Deputy Commissioner said that the basic motive of the DAPO campaign was to ensure that the younger generations were saved from falling in prey of the menace of drugs. He said that the state government has already snapped the supply lines of the drugs and now the need of hour was to check its demand by detoxification and treatment of the drug addicts. Mr. Sharma said that already the wheels of government have been set in motion to ensure that this target was achieved the earliest.

Throwing light on the Drug Abuse Prevention Officer (DAPO) program, the Deputy Commissioner said that this was first of its kind initiative by the Captain Amarinder Singh led state government to check the demand of drugs through mass mobilization. He said that this path breaking initiative was aimed at ensuring maximum public participation in form of DAPO to tackle this menace.  Sharma said that DAPOs would act as a catalyst in transforming the district completely into a drug free and healthy district. “The grave problem of drugs can only be overcome with the active support of the general public, which is the basis of this entire campaign” he added.