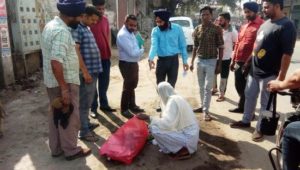 Ferozepur, April 3, 2019: Tightening the noose around those dumping the waste openly following the directions of Deputy Commissioner Chander Gaind, the Municipal Council on Wednesday challaned a doctor after one of his employee working in his clinic, was found throwing bio-medical waste in open.

Earlier also, Municipal Council has imposed a penalty on the orders of Deputy Commissioner on spotting litterbug throwing garbge at illegal dumping points by the ‘Third Eye’ – CCTV cameras have been installed. Taking strict action against the offender the municipal council authorities have challaned him under various provisions of sanitation laws who have to pay a penalty of Rs 2000 to dispose off the case.

Municipal Council’s sanitary inspector Sukhpal Singh and his team stopped the woman when she was throwing a gunny bag packed with the bio-medical waste including syringes, cotton, bandage and etc. The woman revealed the team that she was working in a clinic near Makhu Gate and used to throw such waste here.

The team brought the matter into the notice of Gaind who ordered the team to challan the doctor under Solid Waste Management Rules 2016 and doctor has to pay the fine of Rs 2000.

Further, the Deputy Commissioner directed the Punjab Pollution Control Board (PPCB) to start action against the doctor under Bio-medical Waste Management Rules.

PPCB SDO Rajpal Singh said that proceedings under rules have been initiated against the doctor and a notice is also being issued. He said that the doctor has to reveal about certification, registration or process to handle bio-medical waste. He said that finding an unsatisfactory response, the matter will be given for police action against him.

Civil Surgeon Dr Rajinder Kumar said that none of the hospital, nursing home or clinic can dump the bio-waste openly and can be collected only by registered agencies which dispose of such waste in a scientific manner. Kumar added that the dumping of bio-waste in open can create a hazardous effect on the environment and human health.

Deputy Commissioner said that the action will be taken strictly against the guilty in this case and solicited the support of the people to make Ferozepur one of the cleanest city of the country.