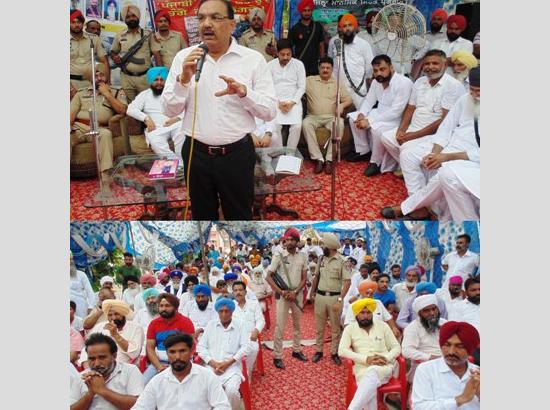 Ferozepur, July 31, 2019: To counter the MLA  Kulbir Singh Zira and Deputy Commissioner  Chander Gaind on Wednesday jointly launched a mass movement against drug menace at Mallanwala town by appealing people to open a front against the drug paddlers in their localities whenever they come to sell the drugs.

The deputy commissioner renamed the anti-drug monitoring committee as anti-drug mass movement committee and requested MLA Kulbir Singh Zira to be the patron of this committee, which will be operated by the residents.

Punjab is grappling with drug addiction problem and to counter the menace, at first, they both inaugurated an Outpatient Opioid Assisant Treatment – OOAT clinic at Mallanwala government hospital, where drug-affected patients can seek treatment from 8 to 11 am.

MLA Kulbir Singh Zira said that this OOAT center will cater the people of Mallanwala and surrounding areas, who earlier had to go to Ferozepur City, Zira or Makhu to get the de-addiction treatment.

After the inauguration, the MLA Kulbir Singh Zira said that to wipe out the drug menace completely, we all have to rise above from party level.

He asked all the 13 councilors municipal authority to provide him with the list of drug paddlers active in their wards.

The deputy commissioner called upon people to come forward to save their kids from the ill-effects of drugs, adding that whenever they see any drug paddler in their localities, shoot a video or take pictures of them and send to the police and district administration and he will ensure compulsory action against them.

With the arrest of Two,Police solve blind murder

70 NGOs roped in to fulfill needs of underprivileged in Ferozepur