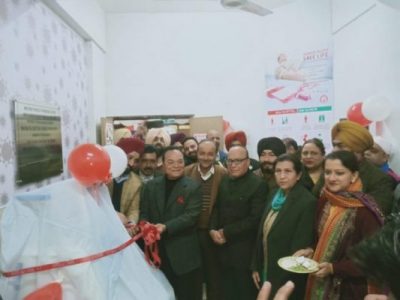 Accompanied by MLA Rajinder Beri and Mayor  Jagdish Raj Raja, the Lok Sabha member said that he was according to top priority to public health by giving maximum possible grants to the health sector from his discretionary funds under MPLAD scheme. The machine has been purchased by the hospital at a cost of Rs 32,84,400 (Rs thirty-two lakh eighty-four thousand and four hundred only) through a grant given by MP Chaudhary from his MPLAD funds.

The Lok Sabha Member said that using the Amicore Platelet Apheresis System, the blood centers could streamline the collection of platelets and increase the productivity of the donor base without trade-offs on donor comfort and safety. He said that that the newly installed system would significantly decrease the cost of platelet collection. He said that earlier, the patients had to go to private hospitals, where the expenses were very high but now, they could come to Civil Hospital and get the same services at a fraction of the cost. Chaudhary Santokh Singh further informed that the demand of the said machine was raised by patients and hospital administration during a visit by him and he had made an announcement for the grant then.

Earlier, he had also given a grant of Rs 30 lakh (Rs thirty lakh only) to the hospital for the purchase of two ventilators.

After the inauguration, MP Chaudhary met the patients and administration and listened to their issues. He assured them that these problems would be resolved at the earliest. He also reviewed the working and progress of Sarbat Sehat Bima Yojna, the health insurance scheme launched by the Government of Punjab covering 75% population of the state.