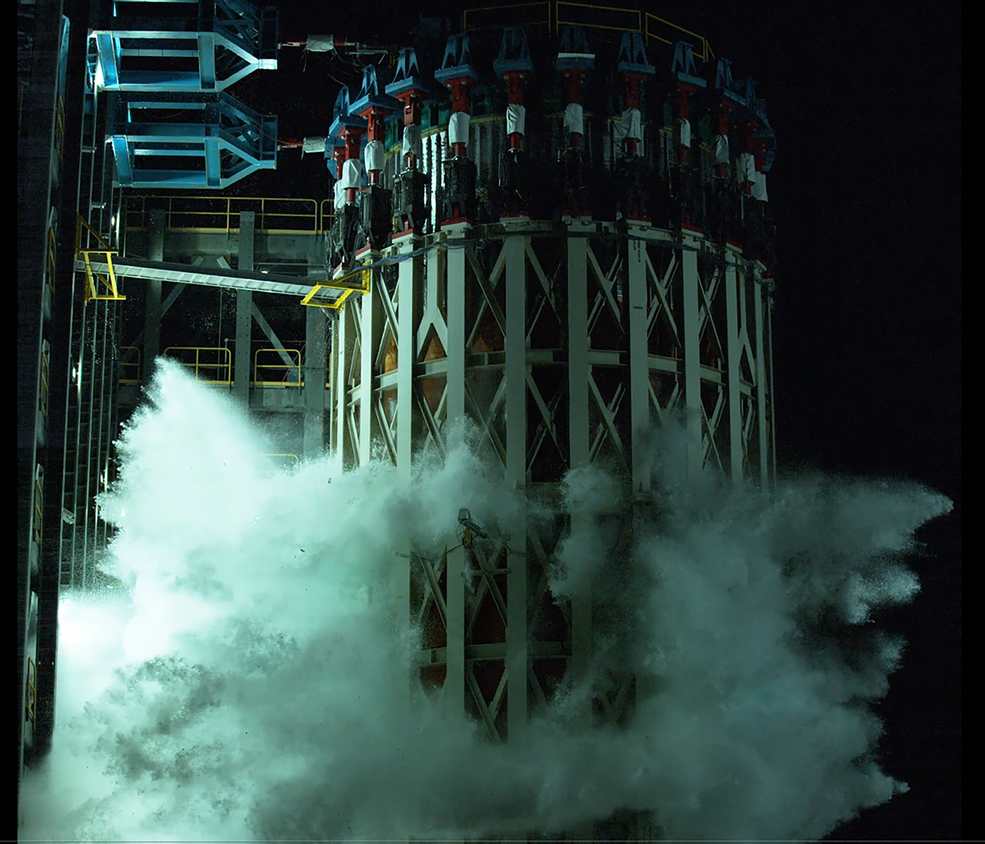 Engineers completed almost 200 tests on the Space Launch System (SLS) rocket by breaking the liquid oxygen tank test article. This test was the last in a 3-year structural campaign to ensure the rocket’s structure was designed to endure the rigors of spaceflight. The tests were essential for safely sending astronauts to space on the Artemis missions the Moon. First, engineers used computer modeling to design the rocket’s major structures to specific factors of safety. Then, they anchored those models with testing to see if the model’s predictions are correct. More than 20 SLS structural tests showed that the liquid oxygen tank would survive the forces predicted to occur during launch and flight. The June 24 test pushed the tank beyond its limits to see how much force it would take to break the tank’s structure. This image shows water gushing out of the tank as it failed. The resulted circumferential buckling of the structure occurred within 2% of the predicted failure value. The test results will provide rocket designers with valuable information for making the SLS tanks lighter and for informing the designs of other government and commercial rockets.
Credits: NASA/David Olive
View Image Feature

The successful completion of SLS structural qualification testing at NASA’s Marshall Space Flight Center in Huntsville, Alabama wraps up the largest test campaign at the center since tests conducted for the Space Shuttle Program, more than 30 years ago. During the test campaign five structural test articles underwent 199 separate test cases and more than 421 gigabytes of data were collected to add to computer models used to design the rocket. The final test marks the achievement of all SLS structural testing requirements prior to the Artemis I mission —  the first in a series of increasingly complex missions that will enable human exploration to the Moon and Mars.

Earlier this year, NASA and engineers from Boeing, the core stage prime contractor, completed 24 baseline tests that simulated actual flight conditions on the liquid oxygen structural test article. For all the tests, thousands of sensors measure stress, pressure and temperature while high-speed cameras and microphones sought to identify any buckling or cracking in the tank’s cylindrical wall. The data gathered from this baseline test helped qualify the SLS core stage structures and integrated upper stage for flight.

The Marshall team has been conducting structural qualification testing on the rocket since May 2017 with an integrated test of the upper part of the rocket stacked together — including the interim cryogenic propulsion stage, the Orion stage adapter and the launch vehicle stage adapter. That was followed by testing of the four largest structures that compose the core stage — the engine section, the intertank, the liquid hydrogen tank and the liquid oxygen tank. Each of these tests provided additional data to computer models that predict how the structures will perform under the harsh conditions of launch and flight.

“The Marshall test lab team has worked closely with the Space Launch System Program to test the rocket’s structures from the top to bottom,” said Ralph Carruth, Marshall’s test lab director. “After watching the test stands being built, working alongside SLS and Boeing engineers to establish testing procedures and conducting and gathering results of five structural qualifying tests, we are proud to contribute data shows these structures can withstand the rigors of flight.”

With the conclusion of testing, designers now have data that may be helpful in optimizing SLS hardware. SLS will have the power to send astronauts forward to the Moon and ultimately to Mars. Testing the new, complex pieces of hardware is critical to the success not only of the first flight test of SLS and NASA’s Orion spacecraft, but also to all future missions.

“This year is a landmark year for core stage testing for the Artemis missions,” said Julie Bassler, the SLS stages manager. “We have successfully completed our core stage major structural tests at Marshall Space Flight Center and are making progress on Green Run testing of the Artemis I core stage at Stennis Space Center that will simulate launch. All these tests are not only valuable for the first Artemis mission but also validates the new integrated design of the SLS core stage structure, propulsion and avionics systems and ensures its readiness for future flights.”

To complete the structural qualification test campaign for NASA’s Space Launch System (SLS) rocket, the liquid oxygen structural test article was pushed beyond its limits until it broke and water gushed from the tank. The tank is a test article that is part of the SLS core stage that will produce 2 million pounds of thrust to help launch the rocket. The tank was bolted into a massive steel ring at the base of Marshall’s Test Stand 4697. Hydraulic cylinders were then calibrated and positioned along the tank to apply millions of pounds of crippling force from all sides while engineers measured and recorded the effects of the launch and flight forces. For the test on June 24, water used to simulate the liquid oxygen flows out of the tank after it ruptures. The structural test campaign was conducted on the rocket to ensure the SLS rocket’s structure can endure the rigors of launch and safely send astronauts to the Moon on the Artemis missions.