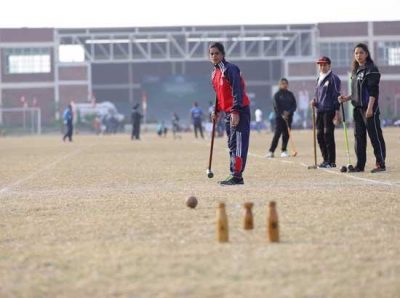 More than 300 players of 26 universities are taking part in the All India Inter-University Woodball (Men & Women) Championship 2020 which began today at the campus of Chandigarh University, Gharuan. Dr. B.S.Sohi, Pro-Vice-Chancellor, Chandigarh University along with Parvin Manwatkar, International Referee and Tournament Director inaugurated the Championship. There are individual category, doubles, mixed doubles and team category of events which will be played during the Championship while Gate 6 of team category of events were played on the first day.

Each team has to play a total of 12 Gates and the team completing all the gates with a minimum number of strokes will be declared the winner at the end. Team Ranchi University comprising of Puja, Kripa and Kajal took lead on the first day of the women’s tournament by taking the least number of strokes 77 to complete the 6 Gates of the tournament with Kirpa taking 25 strokes, Kripa taking 26 strokes and Kajal taking 35 strokes. Team Kalinga University, Chattisgarh maintained the second position as the players Karishma (27 strokes), Anamika (30 strokes), Sanghu Mitra (27 strokes) took 84 total strokes to complete 6 Gates. Team University of Patanjali, Haridwar came close third with the players Pragati (32 strokes), Priyanka (24 strokes), Omini (30 strokes) with an overall stroke of 86 to finish on the first day.

University of Patanjali, Haridwar maintained lead in the men’s category of tournament as the players Manish (25 strokes), Vishal (32 strokes), Utpal (26 strokes) took overall of 83 strokes to complete a game of 6 Gates while team of Kalinga University, Chattisgarh comprising of Vedprakash (36 strokes), Shringee (27 strokes), Pankaj (30 strokes) took overall strokes of 93 to finish second on the first day of the tournament. Team IGNTU Madhya Pradesh has taken a total stroke of 102 to finish third in the tournament.