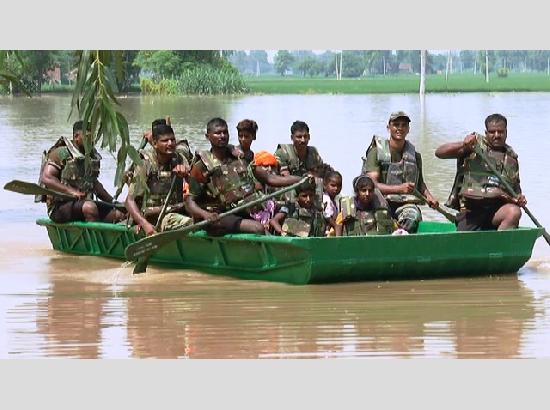 It was the hindsight of deputy commissioner Ferozepur Chander Gaind, who made the deployment of NDRF and Indian Army just as the River Satluj got swollen. Gaind immediately took serious note of the situation and made a requisition to the Ferozepur based Army division to deploy their trained personals in the most sensitive areas from flood point of view.

As the flood like situation in few villages situated on the bank of River Satluj, both the institutions dedicated all their strength to save the precious lives as a result 368 people were rescued including Male, Female, Children and Old age persons. The 7th NDRF team from Bathinda led by inspector Anil Yadav and sub inspector Bihari Lal rescued 88 people including 29 Males, 36 Females and 23 Children. The team is now on stand-by mode at Makhu town.

The local Army Division comprised of 3 columns rescued 280 people at four different places. These teams are also on stand-by mode. Deputy Commissioner Chander Gaind said that keeping in view the current situation the rescue team will be kept on stand-by mode until the danger is completely averted. He lauded the efforts of both the institutions in their selfless service to the marooned villages and appreciated the teams by personally meeting their officials at the spot.

Gaind said that the Jawans meticulously performed their duty to uphold the glorious tradition of Indian Army and NDRF to render selfless service for the masses and it was really a day of these brave hearts.