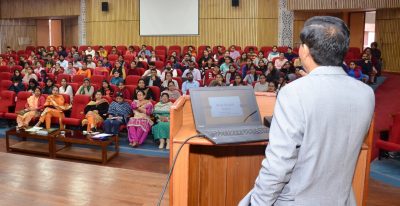 Amritsar, February 23, 2020: National Seminar on Contemporary Issues in Punjab Economy – A Roadmap Ahead was concluded here today in the Guru Nanak Dev University. This seminar was organized by the Punjab School of Economics at Sri Guru Granth Sahib Bhawan of the University. A large number of Scholars and researchers from various institutions participated in this two-day Seminar.

The valedictory address was presented over by Dr. Rattan Chand, Former Chief Director, Ministry of Health and Family Welfare, New Delhi. He talked in detail about the issues concerning the State Health Index. Dr. Chand emphasizes the need for rapid improvement required in the health sector. He also discussed in detail the methodology and conceptualization of the state health index and the role played by the states for the same.

Prof. Kuldeep Kaur, Coordinator of Seminar and Head of Punjab School of Economics thanked the guests and participants. Prof. Neena conducted the valedictory session while Dr. Swati Mehta presented the report of the Seminar.

During this seminar, the research papers covering various issues of contemporary Punjab were presented. Among them were research paper on ‘Digital Payments at Micro and Small Retail Outlets: the way forward’ by Madhvi Julka in which she studied retail characteristics and factors affecting micro, small and retail outlets in Punjab.

The study found that retailers in Punjab favored digital payments but they still called for more government support. In another paper on ‘MSMEs: Giving wings to women (High-Flyer)’  by Palha Khanna in which she argued that increasing family income was the major factor motivating women to enter into entrepreneurship. She also discussed various schemes introduced by the Govt of India to promote women entrepreneurship.

Mr. Vishal presented a paper on ‘Impact of MSMEs Policies in Punjab: a critical review’. In the paper, he studied the impact of the MSME Act on Punjab industries. The study found that post the enactment of act, there has been an increase in investment and the number of units registered in Punjab.

Agaz Ahmed Ganaie presented the paper on ‘Where to locate: insights from Industrial Growth Centre Lassipora’. He highlighted that availability of infrastructure concentration, of Units and assured electricity were the major factor affecting the decision to locate. In another paper, on ‘The precautions Analysis of Growth of MSMEs in India and their contribution in employment and GDP of the country’ by Ms. Gurleen Kaur found a significant and positive correlation between the number of working units and employment.

The Paper titled ‘Structure and Competitiveness of Punjab’s Exports: An Analysis’ presented by  Divya Vaid argued that there has been a compositional shift in Punjab exports from 2003-2004 to 2017-2018. Mitali Nayyar in her paper on ‘Growth and sustainability of small scale industries’ examined the variations in technical efficiency of small scale industries of Punjab. Another speaker Mr. Sumit Kumar in his paper on ‘Tax Potential and Tax Effort in Punjab’. Apart from that  Rachna Arora and Mohd. Arif also presented their research papers.

HMV will serve food to needy people on its 94th Foundation Day,Sareen