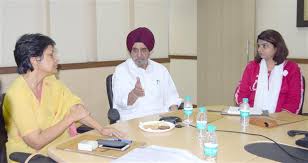 Chandigarh / Mohali, October 10, 2018 ( By Sk.Vyas): Tript Rajinder Singh Bajwa, Housing & Urban Development Minister has directed all the officers to ensure that all the illegal colonies and plots regularized under the new policy approved by the cabinet. Presiding over a high-level review meeting with the senior officers of the department here today at PUDA Bhawan, the Minister said that the policy would be notified soon and process to receive applications of regularization from promoters/RWAs/plot holders would subsequently commence.
Bajwa issued strict instructions that as the policy is a one-time settlement offer, they must make it certain that in future no unauthorized colony comes into existence anywhere in the state.
He asked the officers to ensure that the applications received are disposed of in a time-bound manner. He also appealed to the general public to purchase plots/ houses only in the colonies approved or regularized from PUDA or any other special development authority and those which are RERA approved.  ‘The move of regularizing the unauthorized colonies/ plots would bring major respite to the Promoters/Colonizers as well as the residents of these colonies’, said the Minister.
In the meeting, Vini Mahajan, Additional Chief Secretary, Housing & Urban Development Department, apprised the Minister that to bring transparency in the regularization process and for the convenience of colonizers/ RWAs/ plot holders who would be interested in applying for regularization, for the first time, the department would be offering facility of submitting online applications. Facility of applying online would be made available through the web portal of the departmentwww.punjabregularization.in, she revealed.
However, considering that there will be a large number of applicants who may not be able to apply online on their own, the department has tied up with the Department of Governance Reforms, Government of Punjab to assist such applicants. Under the settlement, 500 odd Sewa Kendra situated in various districts would assist the applicants in submitting applications online.
Apart from this, HDFC Bank has also been roped in by the department to assist the applicants in the submission of online applications. Dedicated desks will be there to address the applicants at various district headquarters. While HDFC bank would assist the applicants free of cost, the Sewa Kendras would charge a nominal fee of Rs. 1000/- from the promoters and Rs. 300/- from the plot holders who would approach there to submit the online applications. Applications received in the Sewa Kendras would be sent to the offices of the respective special development authority, where those would be processed, told the Additional Chief Secretary.