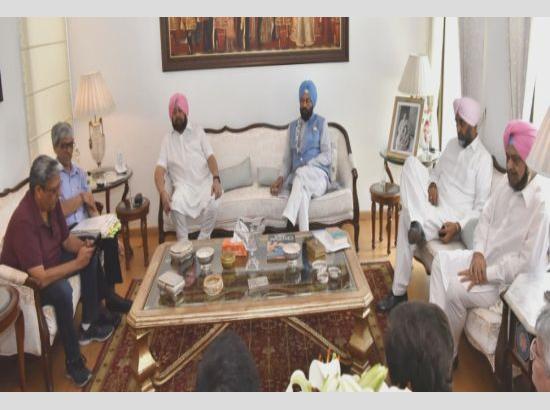 Chandigarh, June 1:, 2019: Chief Minister Captain Amarinder Singh on Saturday gave clearance for the operationalization of a new Sports University in Patiala from September 1, 2019, and directed the Department of Higher Education to finalize the admission regulations for the first batch.

Chairing a high-level meeting of the Steering Committee for the establishment of the university, the Chief Minister also approved `The Punjab Sports University’ as the name of the proposed institution, for which a draft memorandum will be presented in the next cabinet meeting. An ordinance will be brought out to ensure timely commencement of the academic session, according to an official spokesperson of the Chief Minister’s Office.

The Chief Minister directed the Deputy Commissioner Patiala Patiala Kumar Amit to initiate the process of acquisition of 97 Acres of land adjacent to the Rajiv Gandhi National Law University in Sidhowal village, for the construction of the university building. While 97% of the land is being provided free of cost by the village Panchayat, the remaining will be acquired. Acceding to a proposal from the DC, the Chief Minister also gave in-principle approval to reserve some Group C and D jobs for the eligible natives whose land is acquired.

In the interim, Captain Amarinder asked the Sports Department to immediately take possession of Mohindra Kothi to run the institution there till completion of the new building. A sum of Rs 50 lakh has been sanctioned for renovating the Kothi for this purpose, said the spokesperson.

The Chief Minister further asked ACS Sports to explore the possibility of engaging top industrial houses like Reliance and Wipro for sponsoring various courses and the related infrastructural development. Reliance had evinced interest in being part of the venture during the Chief Minister’s visit to Mumbai, it was disclosed at the meeting.

The course curriculum, which has already been finalized, will focus on the development of knowledge, skills and competence at various levels in the fields of physical education and sports sciences, sports technology and high-performance training of all sports and games. It would also provide the best coaching facilities and state-of-the-art infrastructure, besides efficient institutional support and ecosystem to budding athletes to tap their potential at an early stage.

Urging youngsters to take up at least one sport right from school level, the Chief Minister asked the Sports Department to launch an innovative statewide awareness program to attract and capture talent at an early age for nurturance into world-class players.