ON THE WORLD ANTI- DRUG DAY
NGOs have a big role to play to eradicate the ills of drug – addiction : Mayank Foundation 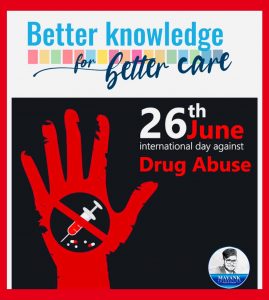 The news of the hacking to death of five persons that includes four members allegedly of a drug smugglers’ family and their driver in Tarn Taran, a border district, laid bare the old wounds of drug trade in Punjab on the World Anti- drug Day. The menace of drug addiction and trafficking has become so menacing that it every section of the society has felt the heat of it. The border towns the likes of Amritsar, Gurdaspur, Ferozepur and Tarn Taran have emerged as the hotbeds of the drug trade and addiction. This bane has acquired the status of the pestilence that has disturbed the entire society in the state.

Though drug abuse is a global phenomenon, but its extent differs from country to country. Punjab has found itself grappling under this serious threat, as a study has revealed that every third person is hooked to drugs. Heroin and intravenous narcotics are among the prevalent drugs that have taken a heavy toll on the youth of Punjab. The news dailies are full of stories of the capturing of drugs along the Indo- Pak border and other parts of the state. The seizure of 532 kg of narcotic substance by the Custom Department at Attari border, as one of the biggest hauls of drugs, the price of which was pegged at Rs. 2700 crore in 2019, points to the magnanimity of the illicit trade of psychotropics in Punjab. The tall claims of political leaders of the state being free of the menace are proved wrong by the seizures and recoveries of the narcotics.

The ill-effects of the drug abuse have already been felt and many young lives and much wealth of the state have gone down the drain. The indulgence of many border residents in the drug trade and addiction is adding to the woes. The sleuths of BSF and Punjab police have tightened the noose on the drug traffickers but the addicts whose only mission is to get the dose at any cost, defy all the restrictions posed by the authorities. Thus, the illicit trade continues to thrive and more and more youth are getting hooked to drugs incessantly.

Though many factors contribute to the thriving of the drug trade in the state. Unemployment, lack of aim in life and rising pressures in life and easy availability of habit-forming substances are leading to the menace of drug- addiction, it is high time to reach out to those entrapped people and help them come out of the dark recesses of drugs. The role of psychiatrists and NGOs is very crucial in the mission of making the state from drug abuse. NGOs can run various campaigns in cooperation with the district administrations and red- cross societies. Let’s join hands to eradicate the land of five rivers and gurus free from narcotics. The addicts are not alien, they are the ones among us and belong to us. And it is our collective responsibility to fight it and end this to restore the lost glory of valour and prosperity.