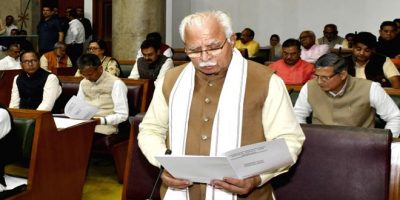 Chandigarh, February 20, 2020: On the first day of the Haryana Vidhan Sabha Session, which commenced here today, obituary resolutions were passed to pay rich tributes to those prominent personalities who have expired between the period from the end of the previous session and the beginning of the current session.

Leader of the House and Chief Minister, Manohar Lal paid tributes and read out the obituary resolutions. These including former Minister of State, former Member of Haryana Legislative Assembly, Freedom Fighters and martyrs of Haryana and close relatives of members of Haryana Vidhan Sabha. The members of House also observed silence to pay homage to the departed souls.

Leader of the Opposition, Bhupinder Singh Hooda also read out the obituary resolutions on behalf of his party.

Apart from this, the House placed on record its deep sense of sorrow on the sad demise of  Fakir Chand Garg, father-in-law of Aseem Goel, MLA, Savitri Devi, aunt of  Gopal Kanda, MLA, and Ram Pyari, wife of Surjeet Kumar Dhiman, Ex-MLA.