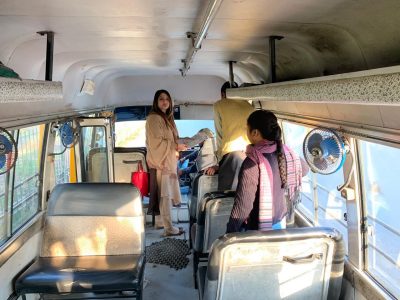 Jalandhar, February 17, 2020: On the directions of Punjab Chief Minister Captain Amarinder Singh, the district administration today cracked down on the vehicles ferrying children to buses by embarking a major drive during which 140 buses were checked, 48 were challenged and nine were impounded.

Divulging the details, Deputy Commissioner Jalandhar  Varinder Kumar Sharma said that with the since of dawn of Monday the various officers of the district administration started the drive to check the school vehicles flouting norms while ferrying the children to schools. He said that during the checking Secretary Regional Transport Authority (RTA) checked 41 school buses, challaned 26 and impounded six of them. Likewise, Mr. Sharma said that Sub Divisional Magistrate Jalandhar II checked 45 buses, challenged seven and impounded two of them for violating norms.

The Deputy Commissioner further said that in order to ensure the safety and security of the school-going children, the Punjab Chief Minister Captain Amarinder Singh had issued direction for the launching of this drive to check the roadworthiness of Buses and other Transport Vehicles that were used for ferrying school children. He categorically said that the lives of innocent school children could not be put in danger by allowing the school going vehicles to flout the norms. Sharma said that the drive would continue in the coming days to add that he would personally monitor the drive to ensure the safety and security of school-going children.