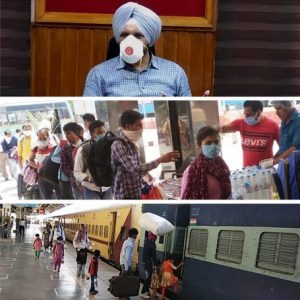 Ferozepur: In the wake of the Covid-19 pandemic, the Punjab government led by Capt Amarinder Singh left no stone unturned to take care of the needy people.  The state at its own expense arranged the movement stranded migrant workers in the State to their home towns through special Shramik trains.

Indian Railways – known as the lifeline of India – has played an important role in shifting the migrants from various places to their home states/districts/town besides transporting the essential commodities through goods trains to the needy states.

The migrants had opted to shift to their home towns in view of curfew/lockdown to combat the spread of coronavirus among the community and shutting down of various establishments.

More than 16,000 migrants had moved during the curfew from Ferozepur by clubbing the migrants from Gurdaspur, Barnala, Mansa, Moga and Fazilka, in 15 Shramik trains.

DC informed besides making the train arrangements, the other expenses on account of tickets, food on the way, screening before boarding the train, distribution of masks etc. were borne by the statement government by making special provision of the budget.

He said, earlier the migrants from other districts were brought to Ferozepur in buses to send them in one special train.  Before departure, they were also made aware of the precautions to be taken in the wake of corona pandemic like wearing masks, maintain social distancing, washing hands frequently by the teams of the health department.