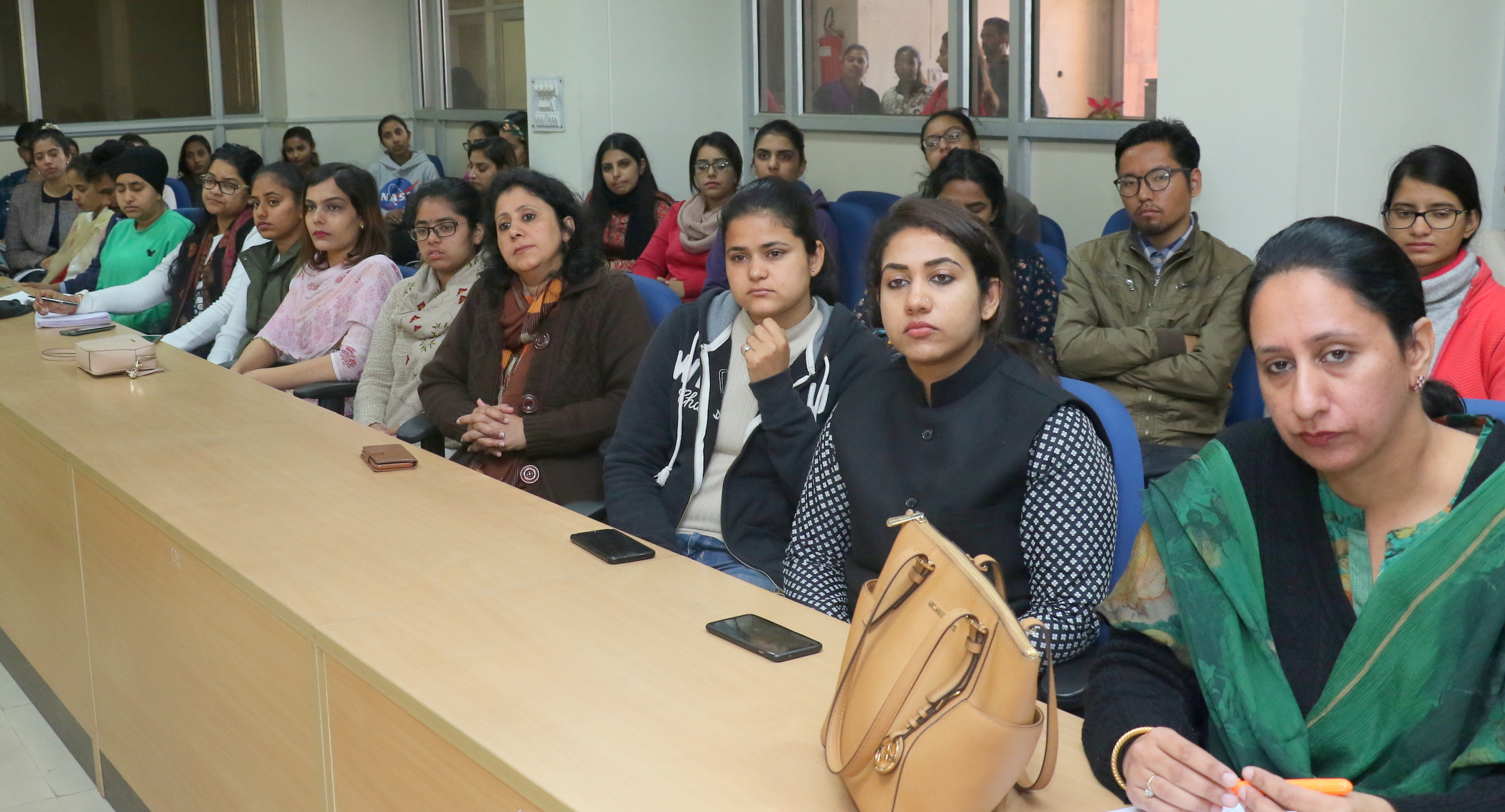 Dr Namita Gupta, Chairperson, Centre for Human Rights and
Duties, PU stated that International Women’s Day is celebrated on
March 8 every year with a purpose to create an equitable society. The
theme of this year’s International Women’s Day, is “Balance for
Better”. A balance cannot be maintained in a society which inflict
violence or discriminate against half of the population of the world.
Acid attack on women is one of the most heinous forms of violence
against women and time has come to raise a voice against any violence
against women in society.

Justice A.B. Chaudhri, Judge Punjab and
Haryana High Court while elaborating on the theme said that it is a
matter of shame that though there have been various laws and policies
framed to protect women from various forms of violence but the ground
reality is totally different and the State still fails in shielding
the women in the manner it should be. There has been lack of speedy
trial and assistance to victims which makes it more difficult for them
to go through various hardships. Making references to various cases
dealt by him, he asserted that there is an urgent need to amend
various laws not only to ensure the safety of women but also to
compensate and rehabilitate victims of violence.
Professor Shankarji Jha, Dean of University Instructions,
Panjab University empathized with the acid attack victims especially
the Ritu Saini. He stated that it is the law of ocean that the
stronger species always try to control the weaker ones. However, in a
civilized society, we should work for the protection of the weaker
sections of the society. 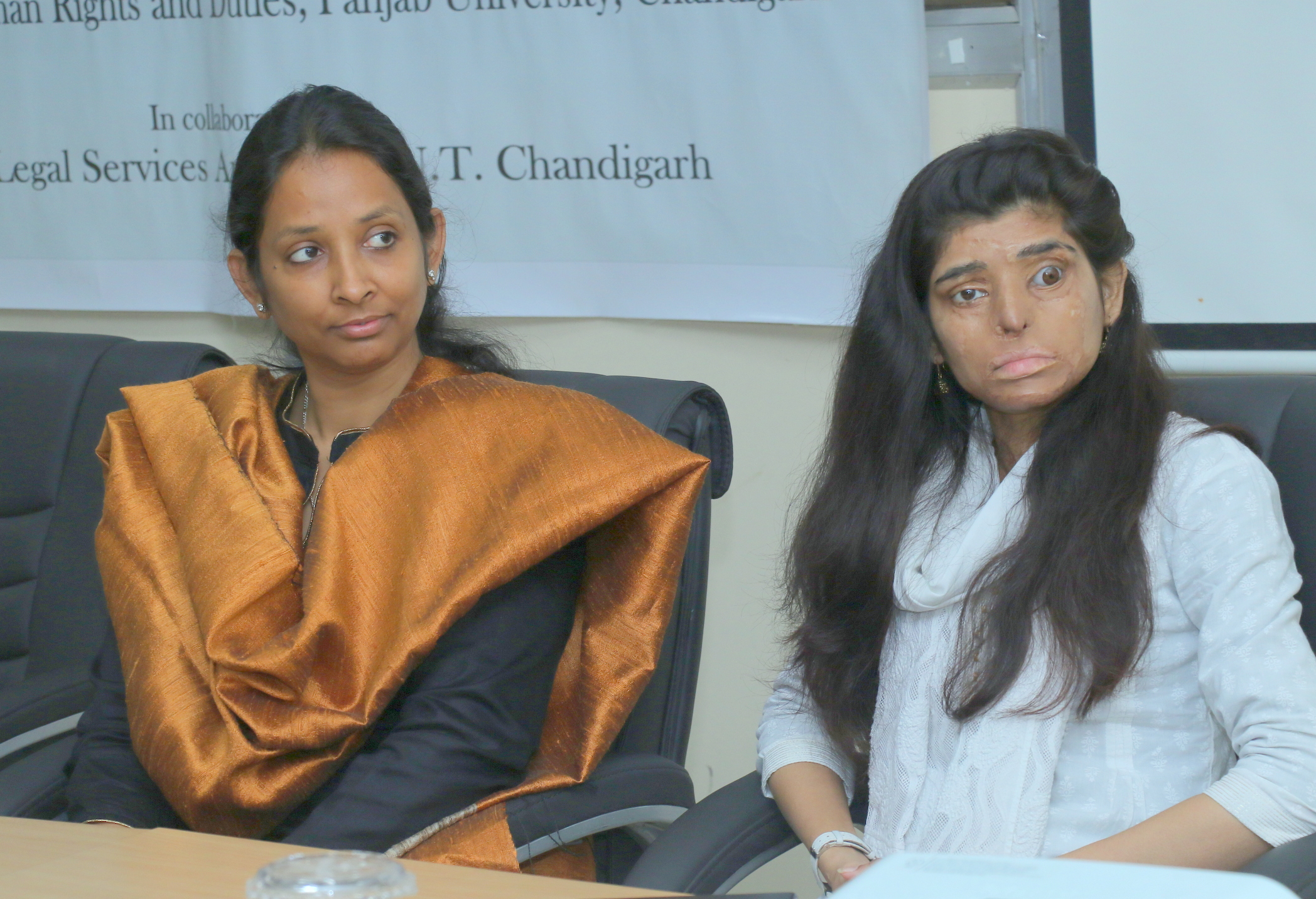 Ritu Saini, an Acid Attack Survivor and a social
worker from Delhi, shared her horrifying experiences. She narrated her
story and revealed that she was only eighteen years old when her
cousin paid someone to throw acid on her. She said that she was a
state Volleyball player and has ambitions like any other girl.
However, one incident changed her life. She has suffered not only
physically but mentally too. She asserted that why are men in our
society not able to accept rejection. She shared her campaign “Stop
Acid Attack” and also about the ‘Sheroes Hangout Café’ run by the acid
attack survivors in Lucknow and Agra.
Veena Kumari, State Director, Human Rights Law Network
(HRLN), Chandigarh, stated that acid attack is an extreme kind of
violence perpetrated against women. She made reference to various
cases especially Supreme Court Judgment of 2013 in Laxmi vs. Union of
India. She stated that acid sale is regulated by law rather than
banning the sale of acid.  She talked about various entitlements which
should be given to the acid attack victims mainly focusing on adequate
compensation. There should be an immediate compensation to be given to
the victim which has to be paid by the perpetrator.
Navpreet Kaur, Founder member, Stop-Sale Acid Campaign
shared experiences of her research on Acid Attack victims and
discussed various cases that she has studied. She drew a conclusion of
her study that one of the prominent reasons behind such crime is
patriarchy embedded in society.
Dr. Upneet Kaur Mangat, Assistant Professor, Centre for
Human Rights and Duties, focused on the gender neutrality of the
issue. She drew attention towards the gender-neutral dimension that
should be considered which framing legal measures, policy measures and
rehabilitation mechanism.
Prof. Rajesh Gill, Chairperson, Department of Sociology,
chair of the panel while concluding the session threw light on the
poor viability of the compensation aspect. She said, “Law is necessary
but not enough. It is the society that has to play an important role
in mainstreaming the vulnerable section of the society.” She also
asked the men in the audience to redefine masculinity in them. She
complemented the individualistic attitude of men who have accepted the
acid attack victims.
The event was well attended by the faculty members,
researchers and students from different departments. Sh Mahavir Singh,
Member Secretary, State Legal Services Authority, Chandigarh was also
present on this occasion.

Prof Tirthankar as Coordinator of Shankaradeva Chair of PU

How I made my Lockdown period productive…!!!

Chairperson, SCS, PU selected as a panel for study by UNESCO