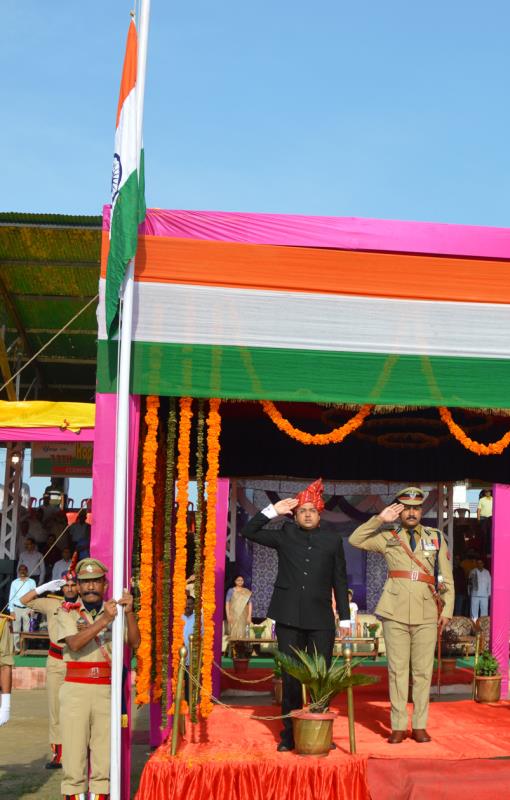 Kathua, August 15, 2019: The 73rd Independence Day celebrated with great enthusiasm, patriotic zeal and national fervor at Kathua.
The main function was held at Sports Stadium, Kathua where Deputy Commissioner, Dr. Raghav Langer hoisted the National flag and took salute from mega parade comprising a total of 46 contingents drawn from CRPF, District Police, Police Training School, NCC boys and Girls, Forest Protection Force and tiny platoons from various Government and Private schools.
During his address, the Deputy Commissioner evoked the sacrifices of the freedom fighters who laid down their lives during freedom struggle to usher in the era of independence. He paid rich tributes to Mahatma Gandhi, Subash Chander Bose, Bhagat Singh, Chander Shekhar Azad, Rajguru, Sukhdev and scores of other unsung heroes of Indian freedom struggle.
He further added that the independence has been achieved after lot of hardships and sacrifices so we must keep in mind that it should be preserved by remaining united against all evils.
He said that the Art and Culture, Basholi Panting and Pashmina besides several shrines and temples of historic importance of the district are famous all over the world.
Highlighting the achievements under medical sector, the DC said that first batch of MBBS recently commenced its classes whereas, more than one lakh beneficiaries were registered under AYUSHMAN Bharat scheme and medicines were distributed through PM Jan Aushadi Yojana. New degree colleges at Ramkot and Marheen, upgradation of schools and construction of new bridges will revamp the overall development scenario of Kathua district, he added.
To tap the tourism potential of the Ranjeet Sagar Dam and its scenic periphery infrastructure for water sports and eco tourism will be developed in coming days, the DC said.
Several steps were initiated to double farmers` income beside Shahpur Kandi and Ujh Multipurpose project will also prove beneficial to farmers as these projects have the potential to irrigate large rainfed areas and will provide drinking water at water stressed areas of the district, the DC maintained.
To mitigate the woes of border dwellers Individual and Community bunkers were constructed to provide them shelter during cross border firing, he said and further added that Seema Bhavans were also under construction which will soon be dedicated to the families of people living in border areas.
Colorful programmes by the Students of various schools were presented besides a Mass Drill of physical exercise by the collage of school students. The DC also gave away prizes and trophies to the participating performers.
Earlier, District Information Centre, Kathua in the wee hours played Shahnai Vadan at DC office complex and SSP office.
Among others, SSP, Shridhar Patil, Additional Deputy Commissioner, Ghanshyam Singh, ASP, Ramnish Gupta, ACD, Tehsildar, District Officers, Prominent citizens, Ex Servicemen and freedom fighters were present on the occasion.
Similarly, the Independence Day celebrations were also held at tehsil head quarters.