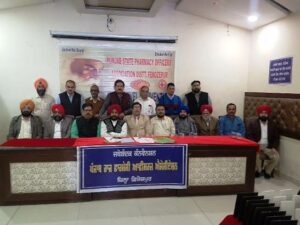 Ferozepur, November 17, 2019:  The Punjab State Pharmacy Officers Association today at its convention held at Ferozepur strongly opposed the proposed amendments in Drug and Cosmetic Act 1945 and appealed to participate actively in the fight against the government in association with Indian Pharmacists Association, said Harpreet Singh Thind, District President.

Divulging with more information, Narinder Mohan Sharma, State President and Ravinder Luthra, State General Secretary said on the one hand, the government is claiming about providing better health services but on the hand, playing mockery with the people over health services by making amendment in the Drug and Cosmetic Act  1945 in Schedule K as the authority to dispense the drugs is only with the pharmacists as per the Drug and Pharmacy Act 1948.

They said, the distribution is being handed over to those who don’t have knowledge about the drugs.  There is a need to bring the profession of pharmacist at par with the developed countries where the disease is diagnosed by the doctor and pharmacist propose the right medicine for the same. But with the proposed amendment, the standard of health services is being lowered.

In the convention, an appeal was made to the government to fill up the vacant posts of pharmacist, creating new posts, bring the control of 1186 village dispensaries under the control of Health Department, crating the post of Deputy Director Pharmacy at the state level and  allowing the pharmacist to write prescription in the absence of doctor.

They said, the patients will receive quality pharmaceutical care by these arrangements.

Despite COVID, work on Shahpurkandi Dam project working in a mission mode Sarkaria

Capt Amarinder asks Sukhbir Badal, Are you rejecting the resolution in totality

International Day against Drug Abuse and Illicit Trafficking to be observed throughout district: DC