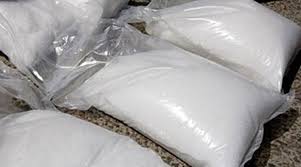 Ferozepur, June 20: In a special joint operation carried out by the Criminal Investigation Cell (CIA) set up by the state government and the sleuths belonging to 136 Battalion of BSF recovered 7.70 Kg heroin worth Rs. 36 crores.

Giving details, Bhupinder Singh SSP said that yesterday police had nabbed four accused identified as Rajinder Singh, Gurmit Singh, Rukmandeep Singh and Arshdeep Singh, all residents of Sri Muktsar Sahib and had recovered 150 gram heroin along with drug money of Rs. 2.60 lakh. The police had also impounded their Scorpio (PB30 R 9170) which they were using. The SSP said during the investigation, it was revealed that the accused had links with Pakistani smugglers and they were going to receive a huge consignment. He said that later a joint search operation was carried out with the help of 136 Battalion of BSF near border out post (BOP) Bareke in which 6.920 kg heroin was recovered near border pillar number 192/13. The consignment was recovered inside a plastic container.