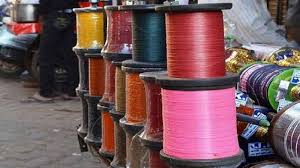 Ferozepur, January 23, 2020:  Working actively on the use of banned thread, the Ferozepur Police have booked two persons under Section 188 IPC on the recovery of 39 rolls of banned Chinese thread.

Giving this information, Jangir Singh, ASI said, the police party was patrolling in the area of Basti Awa when a tip-off was received that Rajiv who is doing the business of selling is waiting for the customers at Basti Awa.

He further said, when a raid was conducted at the designated place, the accused fled away from the scene but 14 rolls of Chinese thread were found.

In another case, Dalip Kumar ASI informed that Gagandeep who is running a sweet shop in Jandi Mohalla is also waiting for the customers for the banned Chinese thread.  On raiding 25 rolls of banned thread were found.

He said further investigations are on after registration of a case in both the cases.