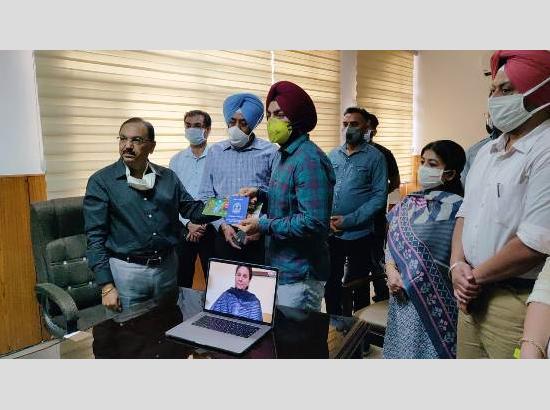 PATIALA, JULY 29, 2020: With a resolve to check land degradation and declining groundwater levels in Punjab, and to ‘nudge’ Patiala residents to lead this combat against deforestation, Commissioner Patiala Division, Chander Gaind has introduced his novel idea today by introducing a rather interesting condition on arms license applicants.

SAVE ENVIRONMENT ‘PATIALA STYLE’, MP PRENEET KAUR APPEALS TO ALL

Terming this initiative as ‘Trees – For – Gun’, Commissioner Gaind, while briefing the Patiala MP Mrs. Preneet Kaur who joined this launching ceremony on video calling, said that the idea was based on encouraging and nudging the people to plant more and more trees, with nurturing too. He said, that anyone who would be desirous to get a new arms license or a renewal of an existing one, would have to plant 10 trees for a new license and 5 for renewal thereafter. One would have to submit a selfie with each planted sapling at the time of filing of an application. After a period of one month, before marking the application for police clearance and Dope Test, the applicant would have to furnish the fresh status of the planted trees by submitting new selfies with the grown trees. He said, in this way, one would have to do this plantation compulsorily, which would then, automatically, contribute to an increased tree and forest cover.

Member of Parliament  Preneet Kaur, while appreciating the idea, appealed to the other districts to follow this remarkable initiative in wake of depleting ecological and environmental balance. Congratulating the Divisional Commissioner and the entire Patiala Administration for taking this lead, she assured that she would promote this idea in the Lok Sabha too for replicating it across the nation. Stressing upon the need for environmental safety, Member of Parliament said that the Punjab Chief Minister Captain Amarinder Singh led state government had promoted forestation that was dedicated to the 550th birth anniversary of Sri Guru Nanak Dev Ji, and now it was started on the occasion of 400th birth anniversary of Sri Guru Teg Bahadur Ji.

She expressed hope that this move will trigger a change in the behavior of masses towards environmental issues and lead in the direction of a massive plantation. She pointed to the fact that India had recently hosted the 14th COP to the United Nations Convention to Combat Desertification, wherein it was stressed that there has to be a worldwide concerted effort to achieve Land Degradation Neutrality (LDN). LDN, she said, is also a crucial sub- target for Sustainable Development Goal 15, and Patiala has a great potential to lead this effort.

Divulging further details, the Commissioner Chander Gaind said that Patiala is amongst the districts that has a large numbers of weapon licensees – with more than 42,000 issued so far, adding that there are around 200 renewal applications that are received every month. If every applicant plants five saplings, we will end up with a thousand saplings planted every month and 12000 per annum in Patiala district itself, the Commissioner added. If implemented across the state, then the figure may be 2.64 lakh annually.

Facilitating the applicants not having their own land for plantation, Gaind said that they can choose public places (Educational Institutions, Religious Places, Roadsides etc.) for the purpose, provided they would have to take the responsibility for its nurturing and care. This, he added, would also then contribute to social forestry.

Commissioner Gaind said that there were about 732 districts in the county, and as an estimate around 200 files pertaining to arms licenses were being cleared in each district, adding he said that if the concept was introduced pan India, we may end up near about 1 crore saplings each year which is going to contribute a lot in national green cover. He also appealed to plant only those saplings that have low absorption of water to contribute towards Jal Shakti Abhiyan, and suggested that these varieties may be of Amla, Neem, Babool, Seesham etc but certainly not of eucalyptus type species.

DC Patiala Kumar Amit asked for proper monitoring of growth of trees planted by the applicants, through the concerned departments. SSP Mandeep Singh Sidhu, ADC (G) Mrs. Pooja Syal Grewal, OSD/CM Punjab, Rajesh Kumar and SDMs  were also present there. Officials also handed over two Licenses to the perons who submitted their selfies with trees planted by them.

It is worthwhile to mention that Divisional Commissioner Gaind, during his previous stint as Deputy Commissioner Ferozepur, had introduced this concept there, which was then applauded by the Chief Minister Captain Amarinder Singh on his Twitter account. The ‘Trees-for Gun’ scheme had also caught an overwhelming interest of the world media and put the border district of Ferozepur on the global map in its combat against desertification.

Photo Caption: Divisional Commissioner Chander Gaind while launching ‘Trees for Gun’ in the online presence of MP Preneet Kaur, hands over a new license to an applicant.