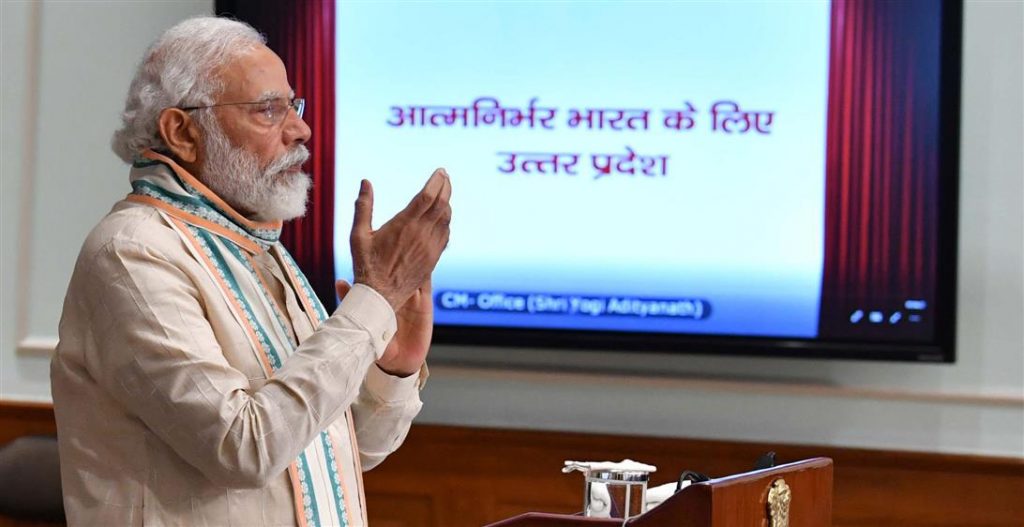 Speaking on the occasion, Prime Minister Shri Narendra Modi said that everyone would be able to surpass the difficulties owing to the COVID-19 Pandemic. He stressed that until a vaccine is found, maintaining Do Gaj ki Doori, covering the face with the mask are the best precautions.

PM expressed satisfaction in the manner in which Uttar Pradesh has turned the disaster into an opportunity, the way people were engaged during this pandemic. He said that other states will also get to learn a lot from ‘AatmaNirbhar Uttar Pradesh Rojgar Abhiyan’ and will be inspired by it.

The PM lauded the courage and wisdom shown by Uttar Pradesh when Corona is in such a major crisis in the world. He said that the way the state succeeded and the way it handled the situation is unprecedented and is praiseworthy.

The Prime Minister lauded the Government of UP making efforts to bring back the migrant labor belonging to the state, by facilitating hundreds of Shramik Express Trains.

He said that more than 30 lakh migrant labor from all over the country returned to their villages in UP in the last few weeks.

The Prime Minister said that the Chief Minister of UP understood the seriousness of the situation and his government worked on a war footing in view of this situation.

The Prime Minister praised the UP government for their unprecedented work in ensuring that the poor don’t go hungry. He said the UP Government acted very promptly in providing free rations to the poor and the migrant labor under the Pradhan Mantri Garib Kalyan Anna Yojana. This was provided for those even without ration cards. He said that in addition to this, about 5 thousand crore rupees were also directly transferred to the Jan Dhan account of 75 Lakh poor women of Uttar Pradesh.

The Prime Minister said that Uttar Pradesh is also leading in the campaign to take India on the path of AatmaNirbhar at a fast pace as well as in the Garib Kalyan Rojgar Abhiyan. He added that under the Garib Kalyan Rojgar Abhiyan, many works are being started in villages to increase the income of the workers. He said that out of this, about 60 lakh people are being given employment in MSMEs under the schemes related to rural development. He said that apart from this, an amount of Rs 10,000 Crore is allocated under the Mudra Yojana for providing self-employment to thousands of people.

Shri Modi said that UP will benefit immensely when clusters of industries are being created to promote such local products across the country under the AatmaNirbhar Rojgar Abhiyan.

The Prime Minister highlighted the recent reforms announced in Agriculture wherein the farmers were freed from various shackles under the law. He said that now the farmers are free to sell their produce anywhere in India and that he can set his price at the time of sowing itself.

The Prime Minister said many new steps are being taken for our livestock viz. A special infrastructure fund of 15 thousand crore rupees has been created for the livestock and dairy sector.

The Prime Minister also referred to declaring Kushinagar airport as an international airport which will be important in terms of promoting the Buddhist circuit. This will strengthen air connectivity in Purvanchal and crores of devotees of Mahatma Buddha in the country and abroad can easily reach UP.

The Prime Minister said that in just three years, more than 30 lakh pucca houses have been built for the poor, UP has been declared free from open defecation, UP Government has given government jobs to 3 lakh youth in a transparent manner.

Modi also referred to the steps taken to reduce infant mortality the rate in the state and how the number of patients of Encephalitis in the Purvanchal region has reduced by 90 percent in the last 3 years.

Prime Minister spoke about the unprecedented improvement in basic infrastructures like electricity, water, and roads.