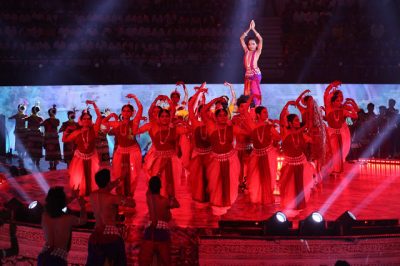 A total of 3,343 athletes from 159 Universities from across India to take part in the event
CUTTACK,–Prime Minster  Narendra Modi inaugurated the first Khelo India University Games amidst of a riot of colour on Saturday. Speaking to the august gathering through a video link, the Prime Minister declared the Games open and exhorted the athletes to better their own performances. “It is a historic moment for Indian Sports. With the launch of Khelo India University Games
India has entered the league of countries where university games are organized at this level. I congratulate the organizers from Odisha who have put together this spectacular event and wish the 3000+ youth athletes from across the country all the best for the Khelo India
University Games.
In the coming few days, the goal is to win medals but even more to better your own performance. Your hard work here will take you, your families and your country’s dream ahead. You have torch
bearers like Dutee Chand here to inspire you. This is the start of a new sports revolution in India,” said the Prime Minister through video conferencing.
A colourful 45-minute cultural-cum-entertainment show marked the ceremony, with a number of top dignitaries, led by Odisha Chief Minister  Naveen Patnaik, Union Minister of Petroleum,
Natural Gas and  Steel Dharmendra Pradhan and Union Minister of Youth Affairs and Sports Kiren Rijiju, witnessing the show.
As many as 4,000 spectators enjoyed the immaculately-conceived ceremony inside the stadium even as scores watched it on LED screens just outside the stadium.
After the stupendous success of the Khelo India Youth Games in Guwahati last month, the Indian Government under the leadership of Prime Minister Narendra Modi decided to take it to the next level by hosting the Khelo India University Games (KIUG).
The Odisha government promptly stepped forward and put everything in place in less than a month.
The KIYG officially began on Friday morning with competitions in archery, fencing, football, basketball and volleyball.
It is the largest ever multi-discipline sports event being conducted at one venue for University students and hopes to unearth talented sportspersons for India.
Chief Minister of Odisha during his speech said, “It is a moment of great pride for us to be hosting the first edition of the Khelo India University Games, here in Odisha, in association
with the Government of India and the KIIT University. Khelo India University Games will provide a great platform to showcase sporting talent at the national level.
“Some of the athletes will return with medals, some with experience and all  with great memories from the Games. I welcome all of you to the sport-loving state of Odisha. And, on behalf of the Government and people of Odisha, I wish all the athletes the very best for their sporting events,” Naveen Patnaik added.
Union Sports Minister Kiren Rijiju, during his address, said that the people of India will definitely see many international champions coming out of the Khelo India University
Games. “I’m sure we will find more Olympians and unearth more talent from the Games. It gives a platform for athletes to showcase their talent at the highest level and also for athletes to interact with one another to share expertise.
I’m confident that through initiatives such as the Khelo India Youth Games and the Khelo India UniversityGames, India will have more stars in the future,” he said.
The opening ceremony was a glittering affair with 390 students performing and showcasing the rich cultural heritage of Odisha. Padmashree Aruna Mohanty choreographed a sequence which
showcased dance forms such as Odissi and Sambalpuri.
The torch relay which kick-started the Games was led by India archer Muskan Kirar who passed on the baton to swimmer S.P. Likith who handed over the torch to former India hockey player
Dilip Tirkey who lit the cauldron.
The oath taking ceremony for athletes was led by ace sprinter Dutee Chand who is taking part in the
Khelo India University Games.
Composer Ram Sampath and Indian singer Sona Mohapatra performed a song which urged athletes to participate with pride during the Games. Musical composer Nakash Aziz motivated the athletes with his song ‘Khelo Khelo’ which talks about taking sports to the next level in India.
The KIUG-2020 boasts of 3,343 athletes (Male – 1,738, Female – 1605) from 159 Universities, plus innumerable technical and support staff. They will compete for glory in 17 sports disciplines: Archery, Athletics, Boxing, Fencing, Judo, Swimming, Weightlifting, Wrestling, Badminton, Basketball, Football, Hockey, Table Tennis, Tennis, Volleyball, Rugby and Kabaddi.
The games will be staged across 10 venues in Bhubaneshwar and Cuttack. The Kalinga Institute of Industrial Technology will be the main center for the sporting extravaganza.
The number of medals up for grabs include 206 gold, 206 silver and 286 bronze. The Games are being telecast live on Star Sports, Hotstar and Doordarshan. The Games have been completely automated from the nomination process to integration of TSR with live telecast.
KIUY-2020 will be conducted on par with any international event with the help of 17 competition managers (one each for every sporting discipline), 740 International and National technical officials (TOs) and 355 sport-specific volunteers (SSVs).
Top universities like Panjab University-Chandigarh, Guru Nanak Dev University-Amritsar, Maharishi Dayanand
University-Rohtak, Punjabi University-Patiala and Delhi University Sports Council, Delhi will all be vying for top honours at the first ever Khelo India University Game.
By Yadavindra S Rana