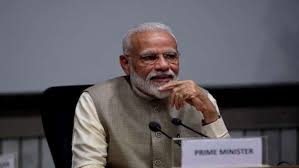 Says Violence does not provide solutions to any problem

New New Delhi,January 26,2020 : In his first ever Mann Ki Baat of the new year and the new decade the Prime Minister Shri Narendra Modi today said that Bru-Reang Agreement closes over two decade old refugee crisis providing succour and relief to over 34,000 refugees in Mizoram.

Explaining the problem in detail, Shri Modi said, “This problem pertains to the 90s. In 1997, ethnic tension forced the Bru-Reang tribe to leave Mizoram and take refuge in Tripura. These refugees were kept in temporary camps in Kanchanpur in North Tripura. It’s painful that the Bru-Reang community lost a significant part of their life as refugees. Life in camps meant that they were deprived of all basic amenities. For 23 years – no home, no land, no medical treatment for their families, no education facilities for their kids.”

Prime Minister said that several Governments have found no cure to the problem and the pain of the refugees. He appreciated the faith of the refugees in the Indian Constitution.

He said it is their belief that today led to the historic agreement that was signed in Delhi this month.

“It’s a result of that belief that their life is on the threshold of a new dawn today. As per the agreement, the path to a dignified life has been opened for them. Finally the new decade of 2020, has brought a new ray of hope in the life of the Bru-Reang community”, he said.

Explaining the benefits of the agreement, the Prime Minister said, “Around 34000 Bru refugees will be rehabilitated in Tripura. Not just that, the government will provide an assistance of close to Rs.600 crores for their rehabilitation and all-round development. Each displaced family will be provided a plot of land. They will be assisted in construction of a house. In addition, rations will be provided to them. They will now be able to benefit from the public welfare schemes of the state and central governments.”

Prime Minister termed this agreement as special, as it symbolises the spirit of cooperative federalism.

He said, “This agreement also epitomises the inherent compassion and sensitivity of Indian culture.”

Prime Minister said that violence cannot provide solutions to any problem. He praised the 644 Militants of 8 groups in Assam who surrendered their arms and decided to return to mainstream.

He said, “Assam, which hosted the grand ‘Khelo India’ games successfully, was witness to another great achievement. A few days ago, 644 militants pertaining to 8 different militant groups, surrendered with their weapons. Those who had strayed towards the path of violence, have expressed their faith in peace and decided to become a partner in the country’s progress and return to the mainstream.”

He said similarly in Tripura more than 80 people left the path of violence and returned to the mainstream and that insurgency in the North-East has considerably reduced.

He said, “The biggest reason for that is that every issue of this region is being honestly and peacefully solved through dialogue.”

He urged those who are still on the path of violence to return to the mainstream.

“On the solemn occasion of Republic day, I would appeal to anyone in any part of the country, who’s still seeking solutions to problems through violence and weapons, to return to the mainstream. They should have faith in their own capabilities and the capabilities of this country to resolve issues peacefully”, he said.