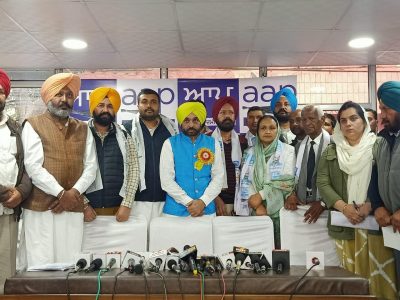 Chandigarh, 19 February 2020:  On the occasion, Bhagwant Mann informed that some leaders of various political parties had joined the Aam Aadmi Party. They were accorded a rousing welcome into the party fold.

Gurpreet Singh Banawali was President of the Akali Dal (Youth Wing) from Mansa (2002 to 2016), a core committee member of Youth Akali Dal, coordinator Shiromani Akali Dal, from Barnala (2015 to 17). He had been director of the Water Supply and Sewerage Board (2009 to 2012), the Youth Development Board, Punjab.

Mr Ram Krishan Kataria, a prominent face of the Balachaur area, is a two-time MLA. He contested four assembly elections from the Balachaur Assembly segment.

Smt Santosh Katria contested assembly election in 2017 from the Balachaur segment on Congress Party ticket but lost by a slender margin of 500 votes. She was chairman, Zila Parishad, Nawanshahr.

Modi government trying to snatch away the right of liberty from people: Sunil Jakhar

Govt. should not run away from its statutory responsibilities of protecting doctors – Aman Arora