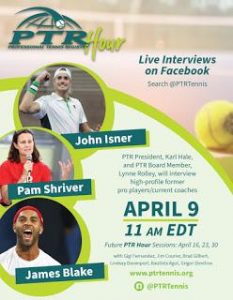 By YS.Rana :
Hilton Head Island, (South Carolina)–Professional Tennis Registry
(PTR) is working diligently to provide avenues for tennis coaches to
stay active, educated and motivated.  Through podcasts and webinars,as well as the new, soon-to-be-released online certification, PTR hasbeen innovating!
One such example is PTR Hour, an entertaining
interview format that looks into the lives and insights of some of the
top current and former players/coaches in tennis.  PTR Hour is
available for all to enjoy on Facebook – @PTRtennis – at 11 am EDT
every Thursday in April.  Plus, PTR Hour will be available on
ptrtennis.org for those who cannot view it live, according to a
communication received from Director of Communications & Editor of TennisPro Magazine Peggy Edwards. Conducting the interviews will be PTR President and Rogers Cup Tournament Director, Karl Hale, and fellow PTR Board member, Lynne Rolley, a former top-ranked player and award-winning coach.  Questions for these ATP/WTA players and coaches can be posted in advance. Don’t miss tomorrow’s inaugural show featuring James Blake, John Isner and Pam Shriver.
Next week’s interviews (April 16) include Jim Courier, Gigi Fernandez and Milos Raonic.  Later this month, Roberto Bautista Agut, Felix Aliassime, Belinda Bencic, Lindsay Davenport,
Brad Gilbert and Stefanos Tsitsipas will be interviewed.
“Each PTR Hour is 60 minutes of insightful and intriguing banter every Thursday in April,” said Hale.  “PTR is empathetic at this very difficult and uncertain time.  We especially want to help our PTR coaches focus on taking the time to enhance their knowledge, and take advantage of PTR’s new online tools, so they can serve their students better once they are back to work.”