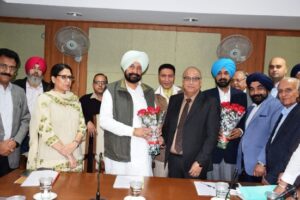 Ferozepur, November 20, 2019:  A deputation of Punjab Chemists Association – PCA, on Tuesday met Health Minister Balbir Singh Sidhu and submitted a memorandum of demands which include the relocation of the premises and transfer of drug license.

Divulging with more details, Subodh Kakkar, President, District Chemists Association, Ferozepur, who also accompanied the deputation – said, a detailed discussions were held on the new drug policy introduced from April 1, 2019 and a memorandum of demands of the problems being faced by the chemists was submitted to the Health Minister, who assured to look into the same for early solution.

Talking about the main demands, Kakkar said, in the event of any dispute among the partners of the firm then there should be a provision for allotment of different drug licenses. Secondly, due to old age or some other compelling circumstances, the license holder should be allowed to get it transferred in the name of other qualified people.  Thirdly, there should also be a facility for relocation and transfer of license in each other district.